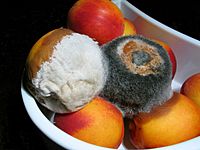 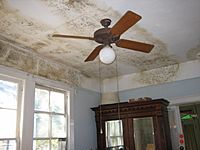 Mould on the ceiling of a home

Mould (or mold) is a type of fungus. It grows in the form of multicellular filaments called hyphae. In contrast, fungi that can adopt a single-celled growth habit are called yeasts.

Molds are a large group of fungi. The growth of their hyphae results in discoloration and a fuzzy appearance, especially on food. The network of these tubular branching hyphae, called a mycelium, is considered a single organism.

Mould grows from spores, which float around in the air. There are thousands of different kinds. Some molds cause disease or food spoilage. Sometimes people use them to make some kinds of cheese. Many antibiotics are developed from natural anti-bacterial substance made by moulds.

All content from Kiddle encyclopedia articles (including the article images and facts) can be freely used under Attribution-ShareAlike license, unless stated otherwise. Cite this article:
Mould Facts for Kids. Kiddle Encyclopedia.