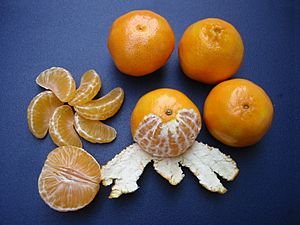 Clementines whole, peeled, half and sectioned.

A clementine (Citrus × clementina) is a hybrid between a mandarin orange and a sweet orange, so named in 1902. The exterior is a deep orange color with a smooth, glossy appearance. Clementines can be separated into 7 to 14 segments.

Similar to tangerines, they tend to be easy to peel. The clementine is also occasionally referred to as the Moroccan clementine. They are typically juicy and sweet, with less acid than oranges.

They are named after a French monk, Père Clément Rodier, who lived in North Africa at the beginning of the 20th century. He either found a natural mutation of the mandarin orange, which he grew, or he created a hybrid of the mandarin and the Seville oranges. The fruit, however, may have originated long before in Asia.

This variety was introduced into California commercial agriculture in 1914. Clementines lose their desirable seedless characteristic when they are cross-pollinated with other fruit. To prevent this, in 2006 growers in California threatened to sue local beekeepers to keep bees away from their crops. 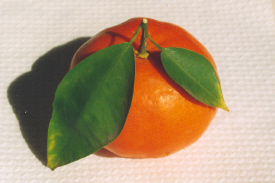 All content from Kiddle encyclopedia articles (including the article images and facts) can be freely used under Attribution-ShareAlike license, unless stated otherwise. Cite this article:
Clementine Facts for Kids. Kiddle Encyclopedia.