Core structure of Penicillin: R is the variable group 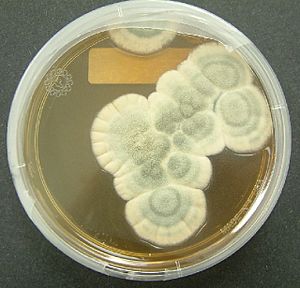 Penicillin is a common antibiotic, used to treat bacterial infections. It was one of the first to be discovered, and worked well against staphylococci and streptococci. Many strains of baceria are now resistant. Chemists keep changing part of its structure in the effort to keep it working against the bacteria.

Penicillin was discovered by Scottish scientist Sir Alexander Fleming in 1928, but it was not mass-produced until the 1940s. The antibiotic is naturally produced by fungi of the genus Penicillium. There is now a whole group of antibiotics derived from Penicillium: penicillin G, procaine penicillin, benzathine penicillin, and penicillin V.

Penicillin is sometimes used to treat tonsillitis, meningitis, and pneumonia as well as other diseases. It was first used widely during World War II.

Penicillin was discovered when Fleming noticed a mould that was stopping bacteria from growing in a petri dish. Australian scientist Howard Walter Florey made the penicillin mould into a medicine. Together with another scientist Ernest Boris Chain, Fleming and Florey were given the Nobel Prize for Medicine in 1945.

Chemist John C. Sheehan at the Massachusetts Institute of Technology (MIT) did the first chemical synthesis of penicillin in 1957.

All content from Kiddle encyclopedia articles (including the article images and facts) can be freely used under Attribution-ShareAlike license, unless stated otherwise. Cite this article:
Penicillin Facts for Kids. Kiddle Encyclopedia.