Antibiotics can kill certain kinds of microorganisms. Over time, those microorganisms often develop resistance to the anitibiotics. Called antibiotic resistance, this is one of the most serious problems facing modern surgery and medicine. It is also one of the best examples of evolution in action.

Antibiotic resistance spreads very quickly, far faster than microbiologists expected. "As long as new drugs keep coming, resistance is not a problem. But there has not been a new class of antibiotics discovered since the 1980s". It is now known that bacteria have a special mechanism, the integron, which speeds up the spread of resistance. 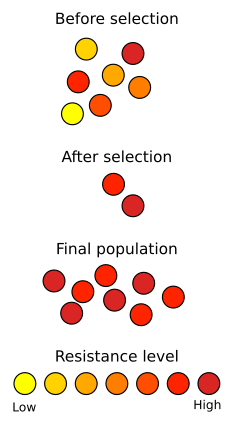 Resistance to antibiotics is increased by the survival of individuals which are immune to the effects of the antibiotic. Their offspring inherit the resistance, creating a new population of resistant bacteria

A well-known example of natural selection in action is the development of antibiotic resistance in microorganisms. Since the discovery of penicillin in 1928 by Alexander Fleming, antibiotics have been used to fight bacterial diseases. Natural populations of bacteria contain, among their vast numbers of individual members, considerable variation in their genetic material, as the result of mutations. When exposed to antibiotics, most bacteria die quickly, but some may have mutations that make them slightly less susceptible. If the exposure to antibiotics is short, these individuals will survive the treatment. This selective elimination of maladapted individuals from a population is natural selection.

"It is not difficult to make microbes resistant to penicillin in the laboratory by exposing them to concentrations not sufficient to kill them, and the same thing has occasionally happened in the body... The time may come when penicillin can be bought by anyone in the shops. Then there is the danger that the ignorant man may easily underdose himself and by exposing his microbes to non-lethal quantities of the drug make them resistant".

Maclyn McCarty explained what it was like before antibiotics:

"There are a number of infections from which no-one had [ever] recovered before the discovery of effective anti-bacterial agents".

Effect on surgery and medicine

All surgery that involves cutting open the body poses massive risks of infection. Antibiotics given before and after surgery allow surgeons to do operations that would have been deadly before. Open-heart surgery is one obvious example.

"It's a pretty grim future, I think a lot of major surgery would be seriously threatened," said Professor Richard James of the University of Nottingham.

Medical uses are also threatened. The number of tests coming back with resistance to carbapenems, one of the most powerful groups of antibiotics, has soared from a handful of cases in 2003 to more than 300 cases by 2010. "My lab is seeing an increasing number of resistant strains year on year," said Prof Neil Woodford, of the Health Protection Agency's antimicrobial resistance unit. Most cases are resistant to some drugs. Even worse, there are a few cases of strains which no antibiotic can touch.

Many infections which were almost eliminated are coming back. Around the world, multi-drug resistant and extremely-drug resistant tuberculosis is a growing problem. Only a couple of drugs still work.

Infections that hit the elderly when they are in hospital are one of the main concerns. The greatest threat in the UK is opportunistic bugs which live in the gut such as E. coli'. They are now the most common form of infection which patients get in hospital. They show rising levels of resistance to antibiotics.

The UK Cabinet Office has issued a warning by the National Risk Register for Civil Emergencies. It says "the number of infections complicated by antimicrobial resistance could increase markedly over the next 20 years". "Without effective antibiotics, even minor surgery and routine operations could become high-risk procedures, leading to increased duration of illness and ultimately premature mortality".

The WHO has issued similar assessments:

"The use and misuse of antimicrobials... over the past 70 years has led to a relentless rise in the number and types of microorganisms resistant to these medicines – leading to death, increased suffering and disability, and higher healthcare costs".

"Deaths from acute respiratory infections, diarrhoeal diseases, measles, AIDS, malaria, and tuberculosis account for more than 85% of the mortality from infection worldwide. Resistance to first-line drugs in most of the pathogens causing these diseases ranges from zero to almost 100%. In some instances resistance to second- and thirdline agents is seriously compromising treatment outcome.
"Added to this is the significant global burden of resistant, hospital-acquired infections, the emerging problems of antiviral resistance and the increasing problems of drug resistance in the neglected parasitic diseases of poor and marginalized populations".

Given enough time, and repeated exposure to the antibiotic, a population of antibiotic-resistant bacteria will emerge. This leads to what is known as an evolutionary arms race, or co-evolution, in which bacteria continue to develop strains that are less susceptible to antibiotics, while medical researchers continue to develop new antibiotics that can kill them. In response, doctors use different, stronger antibiotics. However, new strains of Methicillin-resistant Staphylococcus aureus (MRSA) have emerged that are resistant even to these drugs. A similar situation occurs with pesticide resistance in plants and insects, and with malarial resistance to quinine.

Tuberculosis (TB) is an infectious disease caused by bacteria. It is caused by various types of mycobacteria, usually Mycobacterium tuberculosis. The disease usually attacks the lungs, but it can also affect other parts of the body. The pathogen can travel through the air, and spread from one person to the next. Experts believe that one third of the world population is infected with M. tuberculosis. New infections occur at a rate of one per second.

Drug-resistant TB is a serious public health issue in many developing countries, as its treatment is longer and requires more expensive drugs. MDR-TB is defined as resistance to the two most effective first-line TB drugs: rifampicin and isoniazid. Extensively drug-resistant TB is also resistant to three or more of the six classes of second-line drugs.

Totally drug-resistant TB was first observed in 2003 in Italy, but not widely reported until 2012. It is resistant to all currently used drugs.

The first new antibiotic in forty years has been discovered. It is called teixobactin, and researchers say it is very promising. It has not yet been developed and tested, so it will be some time before it is in doctors' hands. It only works on gram-positive bacteria. However, that does include MRSA and Mycobacterium tuberculosis.

All content from Kiddle encyclopedia articles (including the article images and facts) can be freely used under Attribution-ShareAlike license, unless stated otherwise. Cite this article:
Antibiotic resistance Facts for Kids. Kiddle Encyclopedia.