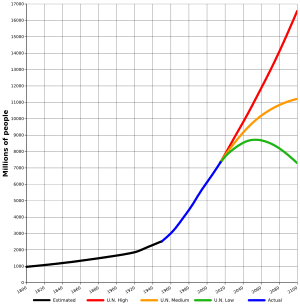 The world's population is increasing all the time because more people are being born than are dying. The population of the world can be changed by other causes such as extinction level events, and natural and un-natural disasters (e.g., earthquakes, war). In January 2012 the United Nations said the Earth's population had reached 7 billion.

All content from Kiddle encyclopedia articles (including the article images and facts) can be freely used under Attribution-ShareAlike license, unless stated otherwise. Cite this article:
World population Facts for Kids. Kiddle Encyclopedia.