Demographics of Pakistan facts for kids 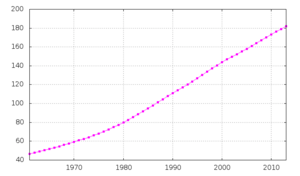 Demographics of Pakistan, Data of FAO, year 2005 ; Number of inhabitants in thousands.

The Demographics of Pakistan are a study of the population and the people. It is estimated that Pakistan's population was over 170,000,000 in mid 2008. Pakistan had an estimated population of 169,300,000 as of July 2007,. Between 1951-1998, the number of people in Pakistan's cities and towns (known as the urban population) increased sevenfold. And by the next decade the population is expected to exceed 176 million. In the past, the country's population had a quite high growth rate. Dramatic social changes have led to rapid urbanisation and the emergence of megacities. Between 1990-2003, Pakistan sustained its historical lead as the most urbanised nation in South Asia, with city dwellers making up 34% of its population.

Pakistan has a multicultural and multi-ethnic society and has one of the largest refugee populations in the world as well as a young population.

Pakistan's next national census will take place in 2008.

The majority of southern Pakistan's population lives along the Indus River. In the northern half, most of the population lives about an arc formed by the cities of Faisalabad, Lahore, Rawalpindi, Islamabad, Gujranwala, Sialkot, Nowshera, Swabi, Mardan and Peshawar.

All content from Kiddle encyclopedia articles (including the article images and facts) can be freely used under Attribution-ShareAlike license, unless stated otherwise. Cite this article:
Demographics of Pakistan Facts for Kids. Kiddle Encyclopedia.