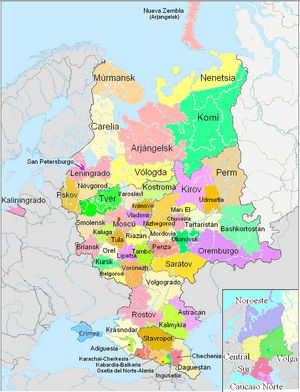 The European part of Russia

Russia is a country that is both in Europe and in Asia. The border is the Ural Mountains and Ural River. By geography, about twenty-five percent of the surface is in Europe, and seventy-five percent is in Asia. By population, about 110 million of the 144 million people, or 77%, live in the European part. The European part makes up 38 % of the surface of Europe. In the European part of Russia, there are 27.5 people per square kilometer. The Asian part has 22 % of the population, which means there are 2.5 people per square kilometer.

The two biggest cities, Moscow and Saint Petersburg are in the European part.

All content from Kiddle encyclopedia articles (including the article images and facts) can be freely used under Attribution-ShareAlike license, unless stated otherwise. Cite this article:
European Russia Facts for Kids. Kiddle Encyclopedia.