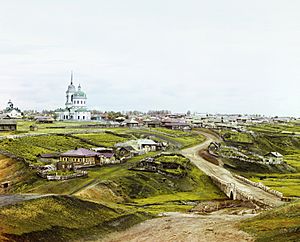 The Village of Kolchedan in the Ural Mountains in 1912 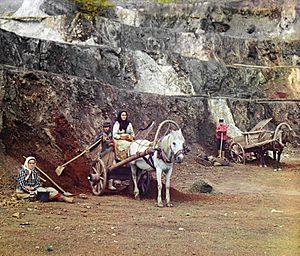 Work at the Bakalskii mine

The Ural Mountains (Russian: Ура́льские го́ры), also known simply as the Urals, is a mountain range that runs roughly north and south through western Russia.

The Urals stretch 2,500 km from the Kazakh steppes along the northern border of Kazakhstan to the coast of the Arctic Ocean. The island of Novaya Zemlya forms a further continuation of the chain. Geographically this range marks the northern part of the border between Asian and European sections of the Eurasian continent. Its highest peak is Mount Narodnaya (Poznurr, 1895 m).

All content from Kiddle encyclopedia articles (including the article images and facts) can be freely used under Attribution-ShareAlike license, unless stated otherwise. Cite this article:
Ural Mountains Facts for Kids. Kiddle Encyclopedia.