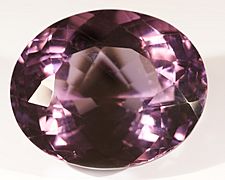 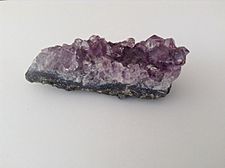 A natural rock with amethyst
This page is about the gemstone. For the color, see Amethyst (color).

An amethyst is a mineral gemstone that comes from quartz. It is usually transparent. It is valued because of its violet colour. Even though it is a form of quartz, it has more iron oxide (Fe2O3) than any other kind of quartz. Because of this, some experts think that its colour comes from the iron in it. Heating the amethyst either takes away its colour or changes it to a yellow hue. Amethysts are found in Brazil, Uruguay, Canada (Ontario) and America (North Carolina). The rock amethyst is the birthstone of the month February. In the Mohs scale, it has a hardness of seven.

The amethyst is worn and used for fashion in a number of different ways. It is polished and shaped for rings, earrings, and cufflinks. It may be also used for brooches, sometimes being carved into a cluster of grapes. People like the way amethysts look, especially when they are put in gold and diamonds.

The amethyst is worn by royalty and nobility. This is because its royal color was purple. When it was found in the Minoan period in Greece (c. 2500 B.C.), it was polished and shaped into cabochons (dome-shaped stones). Then, it was set in gold. During the 15th century, the French fleur-de-lis brooch could only be worn by the Royal family on special times. The fleur-de-lis design on it is put in with sapphires and amethysts.

All content from Kiddle encyclopedia articles (including the article images and facts) can be freely used under Attribution-ShareAlike license, unless stated otherwise. Cite this article:
Amethyst Facts for Kids. Kiddle Encyclopedia.