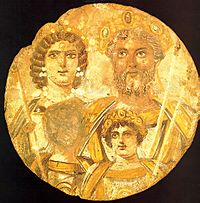 The Severan Tondo, showing Septimius Severus and his sons

The Severan dynasty was a Roman imperial dynasty, which ruled the Roman Empire between 193 and 235. The dynasty was founded by the Roman general Septimius Severus, who rose to power during the civil war of 193, known as the Year of the Five Emperors.

Although Septimius Severus successfully restored peace following the upheaval of the late 2nd century, the dynasty was disturbed by unstable family relationships, and constant political turmoil. It foreshadowed the coming Crisis of the Third Century. It was the last lineage of the Principate founded by Augustus.

The end of the Severids marked the start of the Crisis of the Third Century.

All content from Kiddle encyclopedia articles (including the article images and facts) can be freely used under Attribution-ShareAlike license, unless stated otherwise. Cite this article:
Severan dynasty Facts for Kids. Kiddle Encyclopedia.