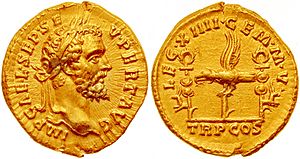 The front an back of an aureus from the year 193

Aureus (plural: aurei) was a type of gold coin in ancient Rome. It had the same value as 25 denarii silver coins. An aureus was the same size as a denarius, but it weighed more because gold is more dense.

The aureus coin was first used in 1st century BC. It stopped being used in the 4th century AD. It was replaced by the solidus.

All content from Kiddle encyclopedia articles (including the article images and facts) can be freely used under Attribution-ShareAlike license, unless stated otherwise. Cite this article:
Aureus Facts for Kids. Kiddle Encyclopedia.