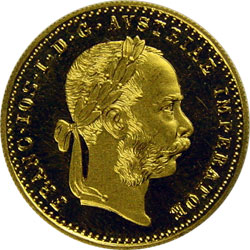 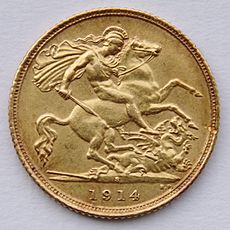 1914 half sovereign from the Sydney mint: the St George and the dragon image was often used on British coins

A gold coin is a coin made entirely (or almost entirely) of gold. Gold has been used since the invention of coins. It is used because gold is an easy metal to use, and because gold is very valuable. So, a person could have a small quantity of gold coins but still buy many things. Gold is also a very dense metal, making gold coins hard to fake. Gold is good for storing coins because it does not rust.

People have used gold to trade since the Bronze Age. However, gold coins have only existed since the 6th century BC, in Anatolia (Turkey). Gold coins were also used in China.

In the Middle Ages, gold coins were common because of the Florin and the Guilder, two important gold coins.

Between 1873 and the early 1900s, gold coins were the main way to pay. Countries stopped using gold coins in 1933 because of the Great Depression. People were collecting and keeping the coins, so there were not enough for the economy to work. Today, many countries make gold coins, but they are for collectors.

Many people enjoy collecting coins. The rarest (most rare) coins are the most expensive. Usually, very few of these coins were made, or they have mistakes, or they are very old. Some countries have made very large coins for collectors.

All content from Kiddle encyclopedia articles (including the article images and facts) can be freely used under Attribution-ShareAlike license, unless stated otherwise. Cite this article:
Gold coin Facts for Kids. Kiddle Encyclopedia.