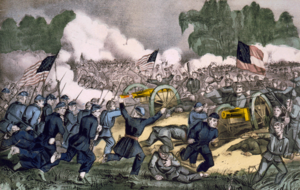 A civil war is a war that takes place between two or more groups in one country. While civil wars can take place for many of reasons, there are two common reasons.

The first is because the different groups disagree about who should be in charge, or how the country should be run. If two political parties disagree about the result of an election, this might lead to a war if the two sides cannot or would not come to an agreement.

The second is because one group of people does not want to be part of the country anymore. This is known as a war of secession. Lots of people living in a certain area might decide that they want independence to make their own country. Very few national leaders would be happy to give up land that is part of that country, and a war could result. 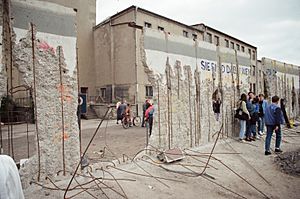 Fall and demolition of the Berlin Wall at Checkpoint Charlie (1990)

Sometimes the people who want to break away do not necessarily want to form a whole new country, but they might want more autonomy over their affairs. This happens sometimes when different ethnic groups belong to the same nation.

Civil wars can be just as destructive and damaging as international wars. Civil wars can continue on for many years. This is because civil wars tend to become complicated very quickly and differ. A civil war might start between two sides, but groups might break up and the new, different sides could start fighting each other. Groups of people who were not involved at the beginning can easily be sucked in, as they start getting weapons to defend themselves against both sides. Civil wars with many different sides all fighting each other have occurred. Sometimes foreign countries help one side.

All content from Kiddle encyclopedia articles (including the article images and facts) can be freely used under Attribution-ShareAlike license, unless stated otherwise. Cite this article:
Civil war Facts for Kids. Kiddle Encyclopedia.