Lebanon is a country in the Middle East, on the Mediterranean Sea. It has a border with Israel to the south, and Syria to the east and north. Lebanon has been independent since 1943. Its capital city is Beirut.

Lebanon has two chains of mountains. It is often called the ruby of the Middle East. It has a coastline stretching all the way up. The area of Lebanon is 10,452 square kilometres.

Over 4 million people live in Lebanon. The people mostly speak Arabic. About 54% of Lebanese people are Muslim and 40.5% are Christian. There are 16 million Lebanese people living in other countries. Lebanon is a very westernized country, is East meets the West.

The national symbol in Lebanon is the Cedar tree, because an abundance of them are found in the Lebanon Mountains.

The historic site of Baalbek in Lebanon 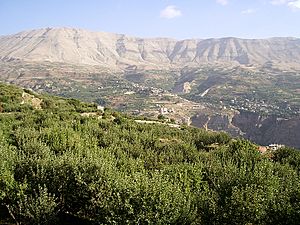 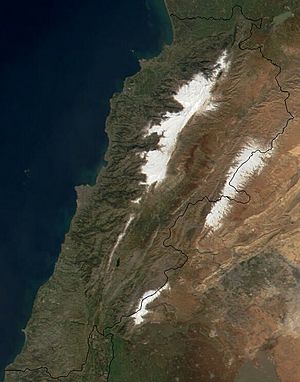 Lebanon from space. Snow cover can be seen on the western Mount Lebanon and eastern Anti-Lebanon mountain ranges

Lebanon is located in Western Asia between latitudes 33° and 35° N and longitudes 35° and 37° E. Its land straddles the "northwest of the Arabian plate".

The country's surface area is 10,452 square kilometres (4,036 sq mi) of which 10,230 square kilometres (3,950 sq mi) is land. Lebanon has a coastline and border of 225 kilometres (140 mi) on the Mediterranean sea to the west, a 375 kilometres (233 mi) border shared with Syria to the north and east and a 79 kilometres (49 mi) long border with Israel to the south. The border with the Israeli-occupied Golan Heights is disputed by Lebanon in a small area called Shebaa Farms.

Lebanon is divided into four distinct physiographic regions: the coastal plain, the Lebanon mountain range, the Beqaa valley and the Anti-Lebanon mountains.

The narrow and discontinuous coastal plain stretches from the Syrian border in the north where it widens to form the Akkar plain to Ras al-Naqoura at the border with Israel in the south. The fertile coastal plain is formed of marine sediments and river deposited alluvium alternating with sandy bays and rocky beaches. The Lebanon mountains rise steeply parallel to the Mediterranean coast and form a ridge of limestone and sandstone that runs for most of the country's length. The mountain range varies in width between 10 km (6 mi) and 56 km (35 mi); it is carved by narrow and deep gorges. The Lebanon mountains peak at 3,088 metres (10,131 ft) above sea level in Qurnat as Sawda' in North Lebanon and gradually slope to the south before rising again to a height of 2,695 metres (8,842 ft) in Mount Sannine. The Beqaa valley sits between the Lebanon mountains in the west and the Anti-Lebanon range in the east; it's a part of the Great Rift Valley system. The valley is 180 km (112 mi) long and 10 to 26 km (6 to 16 mi) wide, its fertile soil is formed by alluvial deposits. The Anti-Lebanon range runs parallel to the Lebanon mountains, its highest peak is in Mount Hermon at 2,814 metres (9,232 ft).

The mountains of Lebanon are drained by seasonal torrents and rivers foremost of which is the 145 kilometres (90 mi) long Leontes that rises in the Beqaa Valley to the west of Baalbek and empties into the Mediterranean Sea north of Tyre. Lebanon has 16 rivers all of which are non navigable; 13 rivers originate from Mount Lebanon and run through the steep gorges and into the Mediterranean Sea, the other three arise in the Beqaa Valley.

Lebanon has a moderate Mediterranean climate. In coastal areas, winters are generally cool and rainy whilst summers are hot and humid. In more elevated areas, temperatures usually drop below freezing during the winter with heavy snow cover that remains until early summer on the higher mountaintops. Although most of Lebanon receives a relatively large amount of rainfall, when measured annually in comparison to its arid surroundings, certain areas in north-eastern Lebanon receive little because of rain shadow created by the high peaks of the western mountain range. 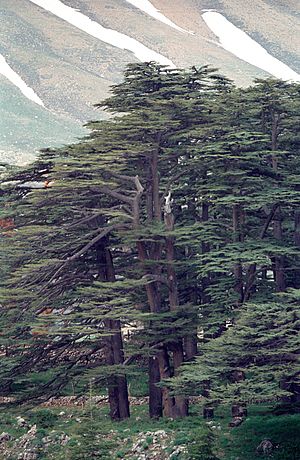 The Lebanon cedar is the national emblem of Lebanon.

In ancient times, Lebanon was covered by large forests of cedar trees, the national emblem of the country. Millenia of deforestation has altered the hydrology in Mount Lebanon and changed the regional climate adversely. Today, forests cover 13.4% of the Lebanese land area; they are under constant threat from wildfires caused by the long dry summer season.

As a result of longstanding exploitation, few old cedar trees remain in pockets of forests in Lebanon, but there is an active program to conserve and regenerate the forests. The Lebanese approach has emphasized natural regeneration over planting by creating the right conditions for germination and growth. The Lebanese state has created several nature reserves that contain cedars, including the Shouf Biosphere Reserve, the Jaj Cedar Reserve, the Tannourine Reserve, the Ammouaa and Karm Shbat Reserves in the Akkar district, and the Forest of the Cedars of God near Bsharri.

In 2010, the Environment Ministry set a 10-year plan to increase the national forest coverage by 20%, which is equivalent to the planting of two million new trees each year. The plan, which was funded by the United States Agency for International Development (USAID), and implemented by the U.S. Forest Service (USFS), through the Lebanon Reforestation Initiative (LRI), was inaugurated in 2011 by planting cedar, pine, wild almond, juniper, fir, oak and other seedlings, in ten regions around Lebanon. Today, forests cover 13.6% of Lebanon, and other wooded lands represents 11%. Since 2011, more than 600,000 trees, including cedars and other native species, have been planted throughout Lebanon as part of the Lebanon Reforestation Initiative (LRI). 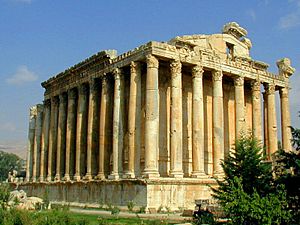 Temple of Bacchus is considered one of the best preserved Roman temples in the world, c. 150 AD 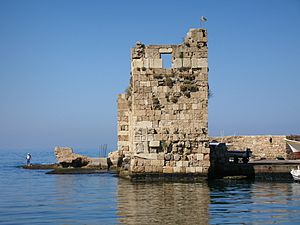 Ruins at port of Byblos.

The culture of Lebanon reflects the legacy of various civilizations spanning thousands of years. Originally home to the Canaanite- Phoenicians, and then subsequently conquered and occupied by the Assyrians, the Persians, the Greeks, the Romans, the Arabs, the Fatimids, the Crusaders, the Ottoman Turks and most recently the French, Lebanese culture has over the millennia evolved by borrowing from all of these groups. Lebanon's diverse population, composed of different ethnic and religious groups, has further contributed to the country's festivals, musical styles and literature as well as cuisine. Despite the ethnic, linguistic, religious and denominational diversity of the Lebanese, they "share an almost common culture". Lebanese Arabic is universally spoken while food, music, and literature are deep-rooted "in wider Mediterranean and Arab Levantine norms". 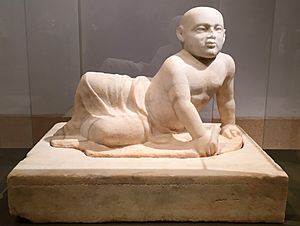 Votive marble statue of a royal child, inscribed in Phoenician from the Eshmun sanctuary, c. 400s BC

In literature, Khalil Gibran is particularly known for his book The Prophet (1923), which has been translated into more than twenty different languages. Several contemporary Lebanese writers have also achieved international success; including Elias Khoury, Amin Maalouf, Hanan al-Shaykh, and Georges Schehadé.

In visual arts, Moustafa Farroukh was one of Lebanon's most prominent painters of the 20th century. Formally trained in Rome and Paris, he exhibited in venues from Paris to New York to Beirut over his career. Many more contemporary artists are currently active, such as Walid Raad, a contemporary media artist currently residing in New York.

In the field of photography, the Arab Image Foundation has a collection of over 400,000 photographs from Lebanon and the Middle East. The photographs can be viewed in a research center and various events and publications have been produced in Lebanon and worldwide to promote the collection. 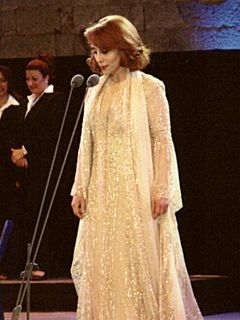 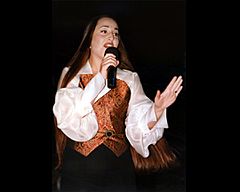 The music of Lebanon is pervasive in Lebanese society. While traditional folk music remains popular in Lebanon, modern music reconciling Western and traditional Arabic styles, pop, and fusion are rapidly advancing in popularity. Lebanese artists like Fairuz, Wadih El Safi or Sabah are widely known and appreciated in Lebanon and in the Arab world. Lebanese singer Lydia Canaan is listed in the catalog of the Rock and Roll Hall of Fame and Museum's Library and Archives in Cleveland, Ohio, USA as the first rock star of the Middle East. Radio stations feature a variety of music, including traditional Lebanese, classical Arabic, Armenian and modern French, English, American, and Latin tunes.

All content from Kiddle encyclopedia articles (including the article images and facts) can be freely used under Attribution-ShareAlike license, unless stated otherwise. Cite this article:
Lebanon Facts for Kids. Kiddle Encyclopedia.