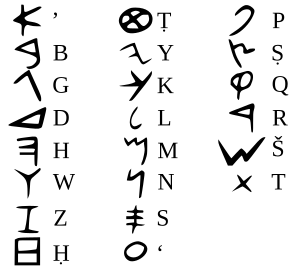 Each letter of Phoenician gave way to a new form in its daughter scripts. Left to right: Latin, Greek, Phoenician, Hebrew, Arabic

The Phoenician alphabet was an alphabetic script that was used in the territories of modern-day Lebanon, Syria and Palestine from about the 12th century to the 5th century BC. It was written right to left. Only consonant sounds are written down, some versions have "helpers" for certain vowels.

It was used to write languages such as Phoenician and Aramaic. The script was developed from the earlier Proto-Sinaitic script. Later, the script developed into the Ancient Greek script. Most alphabetic scripts in use today are derived from the Phoenician alphabet.

Before using the modern Arabic numerals, the Arabic language used a system where each letter also had a numeric value; this system is known as Abjad.

All content from Kiddle encyclopedia articles (including the article images and facts) can be freely used under Attribution-ShareAlike license, unless stated otherwise. Cite this article:
Phoenician alphabet Facts for Kids. Kiddle Encyclopedia.