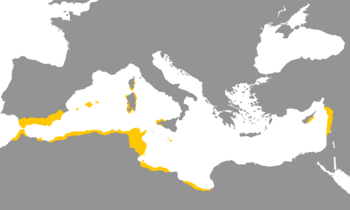 Distribution of the Phoenician language, shown as yellow outline

The area where Phoenician was spoken includes modern-day Lebanon, coastal Syria, Palestine, northern Israel and parts of Cyprus. In some adjacent areas of Anatolia it was spoken as a prestige language. It was also spoken in the area of Phoenician colonization along the coasts of the Southwestern Mediterranean. These include the area of modern Tunisia, Morocco and Algeria. Also in Malta, the west of Sicily, Sardinia, Corsica and southernmost Spain. The Phoenicians were the first state-level society to make extensive use of the alphabet. The Phoenician alphabet is the oldest verified consonantal alphabet, or abjad.

All content from Kiddle encyclopedia articles (including the article images and facts) can be freely used under Attribution-ShareAlike license, unless stated otherwise. Cite this article:
Phoenician language Facts for Kids. Kiddle Encyclopedia.