The 1st century was the century that lasted from year 1 to 100. 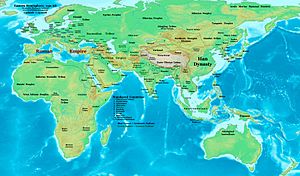 East Hemisphere in 50, in the middle of the 1st century 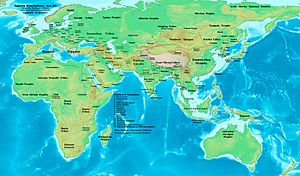 East Hemisphere in 99, at the end of the 1st century

During this period Europe, North Africa and the Near East fell under increasing domination by the Roman Empire. It continued expanding under the emperor Claudius (43). The reforms introduced by Augustus during his long reign stabilized the empire. Later in the century the Julio-Claudian Dynasty, which had been founded by Augustus came to an end with the death of Nero in 68. There followed the famous Year of Four Emperors, a brief period of civil war and instability, which was finally brought to an end by Vespasian, 9th Roman emperor, and founder of the Flavian Dynasty.

China continued to be dominated by the Han Dynasty, despite a 14-year interruption by the Xin dynasty under Wang Mang. Han rule was restored in 23. Wang Mang's rule represents the watershed between the Western/Former Han and the Eastern/Later Han. The capital was also moved from Chang'an to Luoyang. 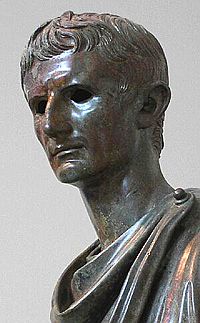 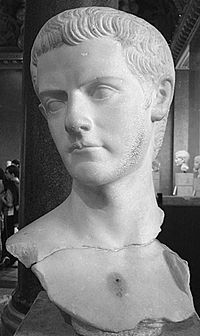 According to the New Testament, during the reign of Tiberius, Jesus, a Jewish religious leader from Galilee, was crucified in Jerusalem on the charge of blasphemy for claiming to be the Son of God. But "God raised him from the dead" three days later, see Resurrection of Jesus. Over the next few decades his followers, following the Great Commission, including the apostle Paul, carried his message throughout the Greek-speaking regions of Asia Minor, eventually introducing it to Rome itself. Roman rulers began to persecute the new sect almost immediately (the emperor Nero accused the Christians of starting the fires that destroyed much of Rome in 64 AD), and would continue to do so for centuries, sometimes vigorously, and other times passively. Christian tradition records that all of Christ's apostles except John the Evangelist suffered martyrdom.

In the 4th century, Christianity was eventually taken up by the emperor Constantine. One of his successors Julian the Apostate renounced it for paganism and again persecuted the Church. However, by the end of the 4th century, Emperor Theodosius I proclaimed Christianity as the state religion of the Roman Empire.

Note: years before or after the 1st century are in italics.

All content from Kiddle encyclopedia articles (including the article images and facts) can be freely used under Attribution-ShareAlike license, unless stated otherwise. Cite this article:
1st century Facts for Kids. Kiddle Encyclopedia.