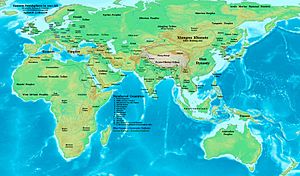 This map shows the Eastern Hemisphere at the beginning of the first century.

The 0s only had nine years which started in 1 AD and ended in 9 AD.

Those people had significant influence on things in this decade.

All content from Kiddle encyclopedia articles (including the article images and facts) can be freely used under Attribution-ShareAlike license, unless stated otherwise. Cite this article:
0s Facts for Kids. Kiddle Encyclopedia.