Kids Encyclopedia Facts
This page is about the year 3 AD. For other uses, see 3 (disambiguation).

The year 3 (III) was a common year which started on a Monday. according to the Julian calendar. According to the Gregorian calendar, it started on a Wednesday. At the time, it was known as the Year of the Consulship of Lamia and Servilius. The year is called 3 since the early medieval period, when the Anno Domini calendar era became the usual method in Europe for naming years. It was the 3rd year of the 1st century. 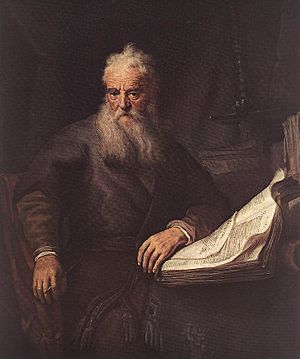 A painting of Paul of Tarsus by Rembrandt.

All content from Kiddle encyclopedia articles (including the article images and facts) can be freely used under Attribution-ShareAlike license, unless stated otherwise. Cite this article:
3 Facts for Kids. Kiddle Encyclopedia.