The current Vikram Samvat year is 2073!

The date marks the day when the King Vikramāditya beat the Sakas, who had invaded Ujjain. A new calendar was started to honor this achievement. 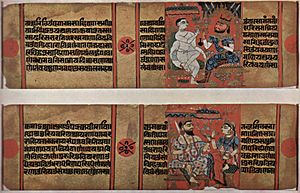 Kalakacharya and the Saka King

The story of this event is told by a monk called Mahesara Suri.

The powerful king of Ujjain, called Gardabhilla, kidnapped a nun, who was the sister of the monk. The monk went to the Saka King to get help, and in the end, the Saka King beat Gardabhilla and captured him and made him a prisoner. But in the end, Gardabhilla was forgiven and run away to a forest, where he was killed by a tiger.

Later on Vikramaditya invaded Ujjain and drove away the Sakas. To commemorate this event he started a new era called the Vikrama era.en:Samvat (calendars)

All content from Kiddle encyclopedia articles (including the article images and facts) can be freely used under Attribution-ShareAlike license, unless stated otherwise. Cite this article:
Vikram Samvat Facts for Kids. Kiddle Encyclopedia.