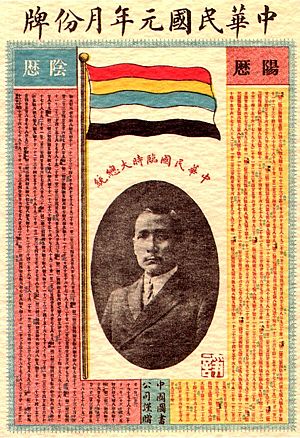 A calendar that commemorates the first year of the Republic as well as the election of Sun Yat-sen as the provisional President.

The Republic of China calendar (traditional Chinese: 民國紀元; simplified Chinese: 民国纪元; pinyin: Mínguó Jìyuán; Wade–Giles: Min2-kuo2 Chi4-yüan2) is a method of numbering years. It is used by TAIWAN as well as other territories which are under control of the Republic of China. The Minguo calendar was also used by Mainland China from 1912 until the People's Republic of China was founded in 1949. There have been legislative proposals by pro-Taiwan Independence parties, like the Democratic Progressive Party to get rid of the Republican calendar and replace it with the Gregorian calendar.

All content from Kiddle encyclopedia articles (including the article images and facts) can be freely used under Attribution-ShareAlike license, unless stated otherwise. Cite this article:
Minguo calendar Facts for Kids. Kiddle Encyclopedia.