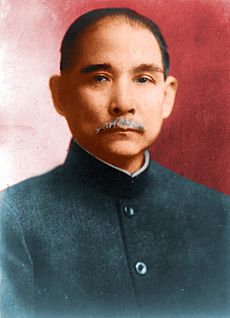 Sun Yat-sen (12 November 1866 – 12 March 1925) was born in China and was a Chinese political leader. Sun helped overthrow the Qing Dynasty in October 1911. This was the last imperial dynasty of China.

He was president when the Republic of China was founded in 1912. He later co-founded the Kuomintang. Sun remains revered in both mainland China and Taiwan.

All content from Kiddle encyclopedia articles (including the article images and facts) can be freely used under Attribution-ShareAlike license, unless stated otherwise. Cite this article:
Sun Yat-sen Facts for Kids. Kiddle Encyclopedia.