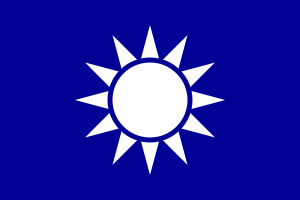 Kuomintang is the main political party in Republic of China (Taiwan). It was ruling in Mainland China until 1949 when Communists captured the mainland and the KMT moved to Taiwan.

It was founded by Song Jiaoren and Sun Yat-sen. Chiang Kai-shek later led for decades.

All content from Kiddle encyclopedia articles (including the article images and facts) can be freely used under Attribution-ShareAlike license, unless stated otherwise. Cite this article:
Kuomintang Facts for Kids. Kiddle Encyclopedia.