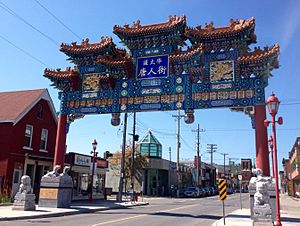 A Chinatown in Ottawa, Canada. 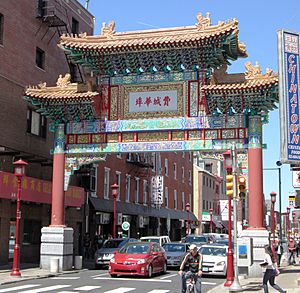 Chinatown is the name used for neighborhood in any city outside of China where many Chinese immigrants came to live together. Chinatowns became common in cities around the world after China lost the first Opium War with the British Empire. After China lost, many Chinese people became poor, especially people living in Guangdong province. That was where most of the fighting took place. People from Guangdong went outside of China to look for work. They moved to places like Malaysia, Singapore, Indonesia, and the United States. When Chinese people moved to these places, they usually lived close together in the city they were staying. These became Chinatowns.

Famous Chinatowns around the world include those in San Francisco, New York City, and Kuala Lumpur.

Most early immigrants came from provinces of Guangdong and Fujian in southeastern China. The common languages there are Toishanese, Cantonese, Hakka, Teochew, and Hokkien. So, these are common languages in many Chinatowns. Also, since most Chinatowns were created before the Chinese Communist Party took over mainland China, most Chinatowns use traditional Chinese characters. However, both simplified and traditional characters are often seen in Chinatowns in Malaysia.

All content from Kiddle encyclopedia articles (including the article images and facts) can be freely used under Attribution-ShareAlike license, unless stated otherwise. Cite this article:
Chinatown Facts for Kids. Kiddle Encyclopedia.