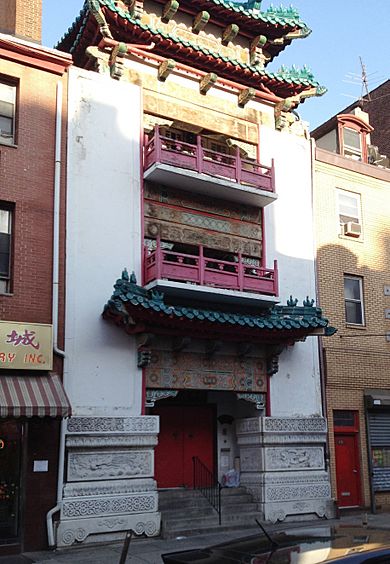 In the mid-19th century, Cantonese immigrants to Philadelphia opened laundries and restaurants in an area near Philadelphia's commercial wharves. This led to the start of Philadelphia's Chinatown. The first business was a laundry owned by Lee Fong at 913 Race Street; it opened in 1871. In the following years, Chinatown consisted of ethnic Chinese businesses clustered around the 900 block of Race Street. Before the mid-1960s it consisted of several restaurants and one grocery store.

In the mid-1960s, large numbers of families began moving to Chinatown. During various periods of urban renewal, starting in the 1960s, portions of Chinatown were razed for the construction of the Vine Street Expressway and the Pennsylvania Convention Center. The Philadelphia Chinatown Development Corporation was formed in 1968. This gave community and business leaders more say in matters of local development.

In years leading up to 1998, businesses catering to other immigrants from East Asian countries, like Korea, Thailand, and Vietnam, opened in Chinatown.

In the late 1990s, the Philadelphia Phillies baseball team was hoping to build a new ballpark in downtown Philadelphia to replace the aging Veterans Stadium in South Philadelphia. Several locations were considered, including 12th and Vine Streets, just north of the Vine Street Expressway. The Philadelphia Chinatown Development Corporation mounted an intense opposition to the ballpark plans. Residents were concerned that the ballpark would destroy Chinatown. The PCDC staged protests and rallies that united neighborhood groups, religious, labor, ethnic, and political groups. Eventually the Phillies built Citizens Bank Park at the South Philadelphia Sports Complex, which opened in 2004.

In 2012, a plan to build the Eastern Tower Community Center was approved by the city council, with construction expected to begin 2016.

The neighborhood is in danger of being gentrified with the increase in white population to the area, as with other East Coast Chinatowns in New York City and Boston. Despite the fact that expansion has occurred into the Chinatown North (Callowhill) neighborhood north of the Vine Street Expressway, the Chinese population continues to dwindle as real estate prices increase with the building of luxury condominiums each unit valued around $250,000 and up in 2013.

Vine Street is the northern boundary of Chinatown. Restaurants and shops, with apartment units located above, are in the buildings south of Vine street, within Chinatown. Factories and other industrial properties are located on the other side of Vine Street. Filbert Street serves as the southern border. Chinatown includes a core area that has seven city blocks. Many of the residents of the block were, as of 1998, recent immigrants.

Developments in the 20th century formed the current boundaries of the Philadelphia Chinatown. In the 1920s ramps leading to the Ben Franklin Bridge were constructed at Chinatown's northern edge. At another point, the city condemned an area east of what is now Chinatown so that the new headquarters of the Philadelphia Police Department, Independence Mall, and a hospital could be constructed. At one point the city proposed building an eight lane highway that would divide the Philadelphia Chinatown into two parts and eliminate the Holy Redeemer Church and School. The church and school remained, while the Vine Street Expressway, smaller than its original proposed size, was built. Cecelia Yep, one of the founders of the Philadelphia Chinatown Development Coalition, said "I think we saw it as a plan to get rid of Chinatown. [The church and school] was the only thing good in Chinatown at the time. We thought it was a fight for survival." The construction of the Market East Station in the 1970s and 1980s established Filbert Street as Chinatown's southern border. As a result of the construction of the Pennsylvania Convention Center, which opened in 1993, the Chinatown buildings on Arch Street, up to the intersection of 13th Street, were demolished. In addition, a federal prison, the Federal Detention Center, Philadelphia, opened in the area. AsianWeek said "Each was built with much compromising, and now they form a circle around Chinatown’s current core of about five city blocks."

As of the 2000 U.S. Census, the service area of the Philadelphia Chinatown Development Corporation had 1,362 residents in 459 households. Of the residents, 1,085 were Asian American, 152 were White American, 71 were African American, 31 were of other races, and 23 were Hispanic American. During that year the community had 509 housing units, with 50 of them being vacant and 85 of them being owner occupied. 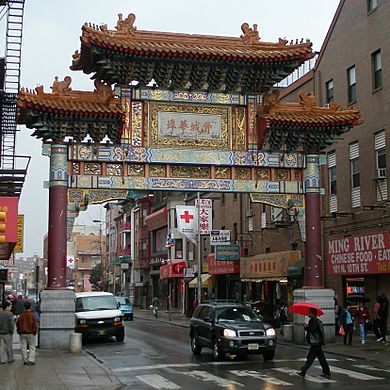 China Gate, view from the south

The Chinatown Friendship Gate at 10th and Arch Street is a symbol of cultural exchange and friendship between Philadelphia and its Chinese sister city of Tianjin. Launched by the Port Agreement signed in Tianjin, China, on November 11, 1982, the Gate was commissioned by the Department of Commerce and the Department of Public Property. It was completed in the winter of 1983-84 and dedicated on January 31, 1984.

The Gate is the first authentic Chinese Gate built in America by artisans from China. Weighing about 88 tons and standing 40 feet high, the Gate has bright colors and elaborate designs that reflect early Chinese imperial construction. It has themes of mythical creatures and graphic patterns typical of the Ming and Qing Dynasties. A procession of mythical animals is featured on tiles. The phoenix is meant to ensure good luck. The dragon, said to have the magical power of retaining water in its mouth, is intended to protect the structure of the Gate and the community from fire. The four traditional Chinese characters on both sides of the Gate are, "費城華埠" (Fèichéng huá bù), which means Philadelphia Chinatown. 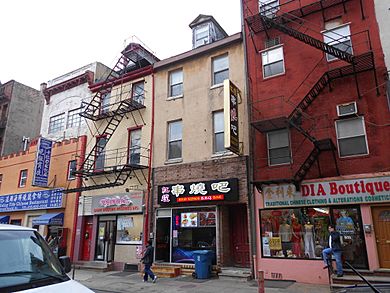 933-935 Race Street. Both buildings are on the Philadelphia Register of Historic Places.

The Chinatown station on SEPTA's Broad-Ridge Spur is located at 8th and Vine streets, and Market East Station is only a block from the Chinatown Friendship Gate. SEPTA also provides local bus transportation to the area.

At one time China Airlines provided a private complimentary bus service from the Holy Redeemer Church in the Philadelphia Chinatown to John F. Kennedy International Airport in New York City to facilitate transportation for passengers for its flights to Taipei, Taiwan. The service now stops in Center City in front of the Marriott Hotel.

All content from Kiddle encyclopedia articles (including the article images and facts) can be freely used under Attribution-ShareAlike license, unless stated otherwise. Cite this article:
Chinatown, Philadelphia Facts for Kids. Kiddle Encyclopedia.