Franklin Square is one of the five original open-space parks planned by William Penn when he laid out the city of Philadelphia, Pennsylvania, in 1682. It is located in the Center City area, between North 6th and 7th Streets, and between Race Street and the Vine Street Expressway (I-676).

Penn included this piece of green space in his original city plan as one of five squares, although the park was slow to develop because it was a marshy land. Originally, the park was a place for settlers to meditate and set a virtuous behavior to set a proper example. The park was supposed to be landscaped to have settlers understand the value of nature. In the 1920s, the park was abandoned and the surrounding area became known locally as the “tenderloin”, with an entertainment district featuring taverns and bordellos, and became a place for individuals experiencing homelessness to sleep on the park's benches, resulting in its reputation as Philadelphia's "skid row". In 2003, Historic Philadelphia, Inc. renovated the park by adding commercials and houses to attract tourists, which in turn helped the park back to its originality. Tourists are now able to enjoy the renovated park, family-friendly attractions, and the surrounding nature. Franklin Square is restored to its original plan as William Penn wanted the park to be used.

It is now managed by Historic Philadelphia, a non-profit organization.

Franklin Square was added to the National Register of Historic Places (NRHP) in 1981.

Originally called North East Publick Square, Franklin Square was renamed in 1825 to honor Benjamin Franklin, one of the Founding Fathers of the United States. William Penn founded the square to establish a commercial center for settlers. He wanted settlers to have a space that was well-ordered to ensure they would set the proper example for fellow settlers. William Penn wanted the space to set an example to promote social discipline. However, William Penn did not have the proper warrant to have jurisdiction over the squares. When more settlers came to the land, the square was subject to neglection. In its early years, the square was an open common used for grazing animals, storing gunpowder during the American Revolution and drilling soldiers during the War of 1812. In 1741, Governor Thomas Penn leased the square to German Reformed Church. From 1741 to 1835, a portion of the Square was used as a cemetery by the German Reformed Church; some of the graves still remain, marked by a plaque. This plan was protested by Philadelphians who felt the cemetery was against William Penn's plan and wanted to ensure the square was used for nature purposes. Even though there were protests, the square was continually used for burial purposes.During the 1820s, William Rush and Thomas Birch redesigned the park to depict nature by designing the park to be symmetrical to walkway and plant locations. This was to ensure the park would be orderly for tourists while ensuring the vision that William Penn had.

From 2003 to 2006, Historic Philadelphia, Inc.— a non-profit company responsible for the Betsy Ross House and several other historical sites — refurbished the park in a $5.5 million project funded primarily by a grant from the state of Pennsylvania. Historic Philadelphia restored the fountain and cleaned up the park, aiming to bring the park back to that envisioned by William Penn. It was reopened and rededicated on July 31, 2006, in Franklin's tercentenary year. The revitalized park contains a number of family-friendly attractions such as a golf course, an improved playground, a carousel, and gardens. The park's restoration helped fulfill one of William Penn's original intentions: a green respite in the middle of the city. Recently, re-development activities surrounding Franklin Square have included new housing, commercial, and office spaces, including the redevelopment of the shuttered Metropolitan Hospital as a condominium project. As a result, pedestrian traffic has increased dramatically and residents and tourists alike are able to enjoy the park's attractions. 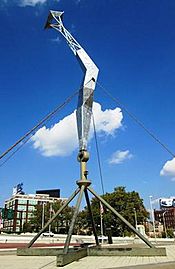 Isamu Noguchi's Bolt of Lightning... A Memorial to Benjamin Frankin (1984)

In 2009, the Delaware River Port Authority (DRPA) announced that it was commissioning a design plan for renovating, modernizing and reopening the PATCO Speedline's underground Franklin Square Station, closed since 1979. As a result of ongoing capital projects scheduled to continue through 2016, PATCO stated in 2014: "We do not presently have the capacity or capital resources to evaluate the feasibility of reopening the Franklin Square Station."

Local legend maintains that Franklin Square is where Benjamin Franklin conducted his famous, though misunderstood, "kite and key" experiment in 1752. However, it would have been unlikely for Franklin to fly a kite near a cemetery, and not all that far from possible observers from town. The legend is memorialized in Isamu Noguchi’s Bolt of Lightning... A Memorial to Benjamin Franklin, a 101-foot tall, 60-ton stainless steel sculpture commissioned by the Fairmount Park Art Association and costing $850,000. It was erected in 1984 in Monument Plaza at the base of the Ben Franklin Bridge, facing the Square across 6th Street, a location personally chosen by Noguchi.

Noguchi had first proposed the sculpture in 1933, but the idea was rejected then as being too radical. The sculpture, which depicts a kite, a bolt of lightning and a key, is not universally admired.

The Franklin Square Fountain was built in 1838 and the source of the water is from Schuylkill River. The fence and stone work of the fountain are from the original layout. The fountain is thought to be the oldest surviving fountain in William Penn's five historic squares. The fountain was the most important piece during the 19th Century. During the 1950s, the park along with the fountain was abandoned and its water was turned off. Historic Philadelphia restored and preserved the historic fountain as part of its park renovation. Now tourists can enjoy the fountain being the centerpiece and the surrounding nature. The fountain is currently receiving a makeover that will add new water features and an LED light show to the fountain, and is expected to reopen in summer of 2019. 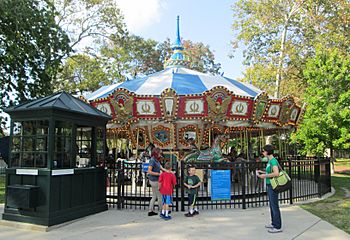 All content from Kiddle encyclopedia articles (including the article images and facts) can be freely used under Attribution-ShareAlike license, unless stated otherwise. Cite this article:
Franklin Square (Philadelphia) Facts for Kids. Kiddle Encyclopedia.