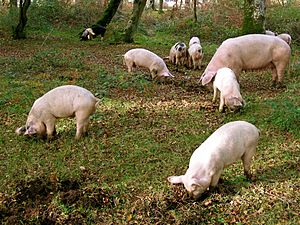 Modern-day pannage, or "common of mast", in the New Forest

Common land (a common) is land where local people have certain rights. For example, to allow their sheep to graze, to collect firewood, or to cut turf for fuel.

By extension, the term "commons" has come to be applied to other resources which a community has rights or access to. Today the term "common" is mainly used for the land over which the rights are exercised. A person who has a right to common land is a commoner.

Today commons still exist in Great Britain and the United States, although their extent is much reduced from the millions of acres that existed in the 17th century.

All content from Kiddle encyclopedia articles (including the article images and facts) can be freely used under Attribution-ShareAlike license, unless stated otherwise. Cite this article:
Common land Facts for Kids. Kiddle Encyclopedia.