Kids Encyclopedia Facts
For the band, see The Pooh Sticks. 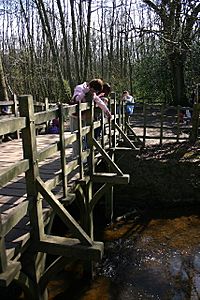 Poohsticks is a game first mentioned in The House at Pooh Corner, a Winnie-the-Pooh book by A. A. Milne. It is a simple game which may be played on any bridge over running water; each player drops a stick on the upstream side of a bridge and the one whose stick first appears on the downstream side is the winner. The annual World Poohsticks Championships have been held at Day's Lock on the River Thames in the UK since 1984.

It is generally agreed that the stick must be made of organic materials, preferably willow, and not of any artificial materials. All participants must drop their sticks at the same time, usually after a referee shouts "drop", "twitch" or any other agreed keyword. Additionally, no advantage may be gained through either dismantling the bridge or the use of any self-propelling stick devices. The stick must be dropped, not thrown, into the water and any player who is deemed to have thrown their stick is disqualified.

Poohsticks is considered to be a game of chance yet some players claim skill is involved. Some strategies involve the way in which the stick is held before it is dropped and trying to find the fastest route in the river. Author Ben Schott outlined a throwing method as a winning strategy in his third book, Schott’s Sporting, Gaming and Idling Miscellany, but his method was dismissed as cheating by competition organisers. In any event, the turbulence around the bridge supports make the path of the stick very difficult to predict and may vary according to the season. 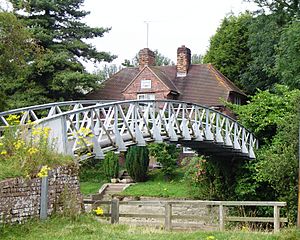 Little Wittenham Bridge with the lock keeper's house beyond

Following the closure of the short-lived Oxford University Poohsticks Society, Poohsticks was brought to a larger audience by the annual World Poohsticks Championships. Originally these took place at Day's Lock on the River Thames near Dorchester-on-Thames, Oxfordshire. but were later moved to Langel Common in Witney, also in Oxfordshire, and have attracted over 1,500 visitors, including many from overseas. The championships features an individual event and a four-person team event. Players come from a wide variety of countries including the United States, Japan, Kenya, Australia and England. Before its move to Witney, the event took place from Little Wittenham Bridge but now uses a bridge over the River Windrush near Cogges Manor Farm.

The sporting event was started at Little Wittenham Bridge in 1984 by the lockkeeper, Lynn David, as a fund-raising event for the Royal National Lifeboat Institution (RNLI). He noticed that people occasionally snapped sticks from nearby hedges to play the game and he then came up with the idea of a competition to aid the charity. He put out a box of sticks and a collection box and it soon became an annual event. In this championship version of the game, a finish line is set up farther downstream and the winner is the first to pass this point. The competition originally took place every January, but it was moved to March due to icy weather in 1997. 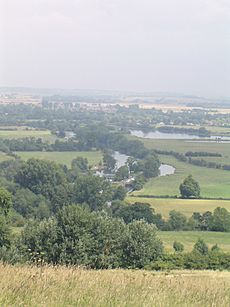 Day's Lock from Wittenham Clumps (or Sinodun Hills) in summer

The event proved popular with the local community and even attracted the attention of the foreign media. After Lynn David's retirement, the running of the event was taken over by the former Rotary Club of Sinodun, based in nearby Wallingford. Additionally, the funds raised were divided between the RNLI and charitable projects supported by the Rotary Club. Twenty years after its first edition, the event had grown in popularity, attracting visitors from across the globe, and had been broadcast on television in countries including Russia, Japan and Czech Republic. Additionally, VisitBritain, the official British tourist board, named it as a highlight in its collection of "Quirky British Events". Throughout its existence, it has raised around £30,000 for the RNLI.

The Championships were at risk of decline when in 2008 the Rotary Club declared that its members were simply too old to stage an annual event of its size. The Sinodun president, David Caswell, stated: "The trouble is there is a lot of heavy work staging the event. Some of our members are over 70, and it was just getting too much". However, the Rotary Club of Oxford Spires declared that its members would continue hosting the event, thus preserving the competition for future generations. The President of Oxford Spires for 2008–2009, Liz Williamson, stressed that it should continue as the event was popular locally and demonstrated quirky English nature to a worldwide audience.

The organisers announced in January 2015 that they had decided that the Little Wittenham site was no longer suitable, citing increasing logistical difficulties as the event had become more popular and the use of the land had changed. In June the World Championships were held at their new home, one of the cycle-track bridges over the River Windrush on Langel Common, near the Cogges Manor Farm Museum in Witney, Oxfordshire. The new location still retains a rural atmosphere but is a few minutes' walk from Witney town centre with its convenient public transport links to Oxford. Car parking is also much closer than at the original venue, a factor that influenced the choice of venue. For the first year at the new location, the organizers decided not to hold the 2015 team games, but team games were restored in 2016. The move to the new venue also allowed the event to move to June when the weather is likely to be better.

The winners of both the individual and team events receive a trophy, and the second- and third-placed individuals and teams also receive a smaller trophy. Despite claims that the game involves skill more than luck, no team or individual has ever won the competition more than once. The individual competition usually involves winning three rounds of matches before receiving an entry to the final.

Although not a Poohsticks Society as such, the Rotary Club of Oxford Spires is responsible for the World Pooh Sticks Championships held annually since 1983 at Days Lock on the River Thames then in Witney since 2015. The Championships were voted 'Britain's Favourite Quirky Event' by Countryfile magazine readers in 2012 and are carried out with the aim of raising money for a variety of charities.

Founded in 1993, students of Pembroke College, Cambridge, pay homage to the works of A. A. Milne in a variety of ways, including playing games of Poohsticks alongside events such as visits to the 'real-life' Hundred Acre Wood.

Membership is open to all students of the University of Cambridge. The club mainly consists of "Feasts" organised at a variety of colleges once a term, usually during a formal. Members attend with a suitable stick, and have ample choice to drop their sticks together over Mathematical Bridge, Queens' College (1902), King's College Bridge (1819), Clare College Bridge (1640), Garret Hostel Bridge (1960), Trinity College Bridge (1764), Kitchen Bridge, St John's College (1709–11), Bridge of Sighs, St John's College (1831), and Magdalene Bridge (1823). Alongside this, trips are organised to other rivers within a reasonable travelling distance from Cambridge. This could be in Grantchester, the River Thet or perhaps the little River Ouse.

All content from Kiddle encyclopedia articles (including the article images and facts) can be freely used under Attribution-ShareAlike license, unless stated otherwise. Cite this article:
Poohsticks Facts for Kids. Kiddle Encyclopedia.