A. A. Milne facts for kids

Alan Alexander Milne ( January 18, 1882 – January 31, 1956) was an English author. He was best known for his books about the delightful teddy bear Winnie the Pooh and for many poems.

Milne's son, Christopher Robin, was the inspiration of the character that had the same name in his Winnie the Pooh books. 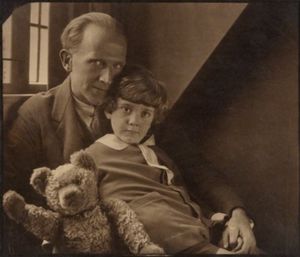 Milne with his son Christopher Robin and Pooh Bear, at Cotchford Farm, their home in Sussex. Photo by Howard Coster, 1926. 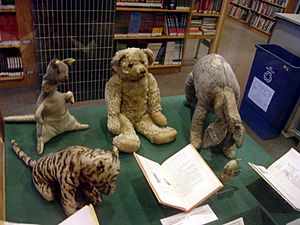 The real stuffed toys owned by Christopher Robin Milne and featured in the Winnie the Pooh stories. They are on display in the New York Public Library Main Branch in New York. Missing is Roo, who was lost when Christopher Robin was 9.

Milne was born in Scotland but raised in London. One of his childhood teachers was H. G. Wells. Milne attended Westminster School and Trinity College, Cambridge where he studied on a mathematics scholarship.

Beginning in 1906, Milne wrote for the humorous British magazine Punch. He later became an assistant editor for Punch. 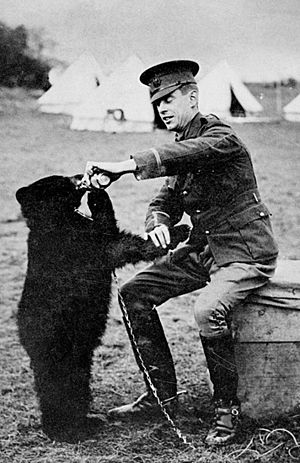 Harry Colebourn and Winnie, the bear from which Winnie the Pooh derives his name

After Milne returned home from World War I, his son, Christopher Robin Milne, was born in 1920. Milne's Pooh books feature a boy named Christopher Robin, after his son, and various characters inspired by his son's stuffed animals. The most famous of these was the bear named Winnie the Pooh. A Canadian black bear named Winnie (Winnipeg), used as a military mascot and left to London Zoo after the war, is said to have been the source of the name for Milne's most famous character. The Hundred Acre Wood was inspired by Ashdown Forest in Sussex. E. H. Shepard illustrated the original Pooh books.

In 1925, Milne bought a country home, Cotchford Farm in Hartfield, East Sussex. This farm is where he retired to after brain surgery in 1952 left him an invalid. After Milne's death, rights to the Pooh characters were sold to the Walt Disney Company, which has made a number of Pooh cartoon movies, as well as a large amount of Pooh-related merchandise.

Milne also wrote a number of poems, including "Vespers", "They're Changing Guard at Buckingham Palace", and "King John's Christmas", which were published in the books When We Were Very Young and Now We Are Six. His poems have been parodied many times, including in the book Now We Are Sixty.

He also adapted (changed) Kenneth Grahame's novel The Wind in the Willows for the stage as Toad of Toad Hall.

Milne wrote over 25 plays including:

The play The Fourth Wall was made into a film called The Perfect Alibi.

All content from Kiddle encyclopedia articles (including the article images and facts) can be freely used under Attribution-ShareAlike license, unless stated otherwise. Cite this article:
A. A. Milne Facts for Kids. Kiddle Encyclopedia.