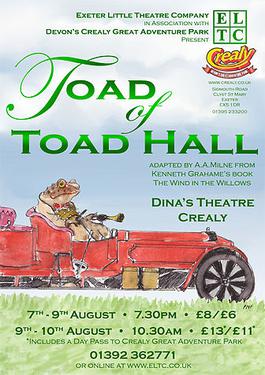 Poster for a 2008 theatrical production of Toad of Toad Hall

Toad of Toad Hall is a play written by A. A. Milne, the first of several dramatisations of Kenneth Grahame's 1908 novel The Wind in the Willows, with incidental music by Harold Fraser-Simson.

Its first production was at the Lyric Theatre, London on 17 December 1929.

Milne extracted the adventures of Mr. Toad, which make up about half of the original book, because they lent themselves most easily to being staged. Milne loved Grahame's book, which is one of the reasons he decided to adapt it.

The play has four main characters: Rat, Badger, Mole, and Toad. Toad's caravan and car adventures are included, as well as his imprisonment, escape, and subsequent fight with the weasels and stoats to regain Toad Hall with the help of his friends. Although not a musical, the play contains six songs, with music written by Harold Fraser-Simson.

During the play's history many actors have played the part of Toad in a number of plays, films, and TV dramatizations. These include:

The play was adapted by the BBC in 1947 as a television movie, Toad of Toad Hall.

The play was produced by BBC Radio 4 on 21 April 1973 for the Saturday Night Theatre.

All content from Kiddle encyclopedia articles (including the article images and facts) can be freely used under Attribution-ShareAlike license, unless stated otherwise. Cite this article:
Toad of Toad Hall Facts for Kids. Kiddle Encyclopedia.