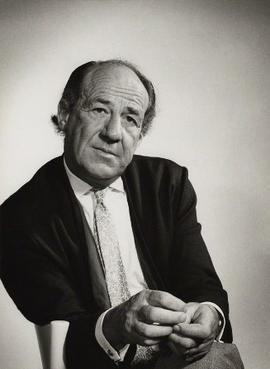 Sir Michael Murray Hordern CBE (3 October 1911 – 2 May 1995) was an English actor whose career spanned nearly 60 years. He is best known for his Shakespearean roles, especially that of King Lear, which he played to much acclaim on stage in Stratford-upon-Avon in 1969 and London in 1970. He then successfully assumed the role on television five years later. He often appeared in film, rising from a bit part actor in the late 1930s to a member of the main cast; by the time of his death he had appeared in nearly 140 cinema roles. His later work was predominantly in television and radio.

Born in Berkhamsted, Hertfordshire, into a family with no theatrical connections, Hordern was educated at Windlesham House School where he became interested in drama. He went on to Brighton College where his interest in the theatre developed. After leaving the college he joined an amateur dramatics company, and came to the notice of several influential Shakespearean directors who cast him in minor roles in Othello and Macbeth. During the Second World War he served on HMS Illustrious where he reached the rank of lieutenant commander. Upon his demobilisation he resumed his acting career and made his television debut, becoming a reliable bit-part actor in many films, particularly in the war film genre.

Hordern came to prominence in the early 1950s when he took part in a theatrical competition at the Arts Theatre in London. There, he impressed Glen Byam Shaw who secured the actor a season-long contract at the Shakespeare Memorial Theatre where he played major parts, including Caliban in The Tempest, Jaques in As You Like It, and Sir Politick Would-Be in Ben Jonson's comedy Volpone. The following season Hordern joined Michael Benthall's company at the Old Vic where, among other parts, he played Polonius in Hamlet, and the title role in King John. In 1957 he won a best actor award at that year's British Academy Television Awards for his role as the barrister in John Mortimer's courtroom drama The Dock Brief. Along with his theatrical responsibilities Hordern had regular supporting roles in various films including Cleopatra (1963), and A Funny Thing Happened on the Way to the Forum (1966).

In the late 1960s Hordern met the British theatre director Jonathan Miller, who cast him in Whistle and I'll Come to You, which was recorded for television and received wide praise. Hordern's next major play was Jumpers which appeared at the Royal National Theatre at the start of 1972. His performance was praised by critics and he reprised the role four years later. His television commitments increased towards the end of his life. His credits include Paradise Postponed, the BAFTA award-winning Memento Mori, and the BBC adaptation of Middlemarch. He was appointed a CBE in 1972 and was knighted eleven years later. Hordern suffered from kidney disease during the 1990s and died from it in 1995 at the age of 83.

All content from Kiddle encyclopedia articles (including the article images and facts) can be freely used under Attribution-ShareAlike license, unless stated otherwise. Cite this article:
Michael Hordern Facts for Kids. Kiddle Encyclopedia.