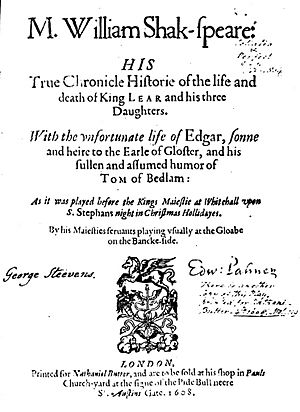 The title page of the first printed version of King Lear

King Lear is a tragedy written by William Shakespeare. He based it on an old British story about a king named Leir or Lyr. The play might have been first performed in December 1606. It was first printed in 1608. It was printed again in 1623 in the First Folio. This is a collection of all of Shakespeare's plays. Many great actors over the years have played the part of King Lear.

The play is about an old king named Lear. He wants to divide his land between his three daughters. To get the land, they must tell him how much they love him. His youngest daughter Cordelia will not say how much she does.

She says words will not be able to describe her love. Lear gets angry at her and will not give her land, and says she is not his daughter anymore. He gives his land to his other daughters Regan and Goneril.

The king soon finds out that Regan and Goneril do not love him. They only wanted his land. Lear becomes very mad. The two daughters, and their husbands, throw him out of the land that is now theirs. The rest of the play is about Lear's trip around the land that was once his as he becomes insane.

All content from Kiddle encyclopedia articles (including the article images and facts) can be freely used under Attribution-ShareAlike license, unless stated otherwise. Cite this article:
King Lear Facts for Kids. Kiddle Encyclopedia.