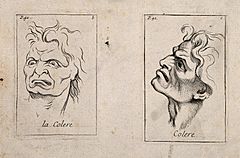 A drawing of faces expressing anger.

Anger is one of the basic emotions. It is an inherited response, and is common to all mammals and a number of other animals. It happens when we are threatened, offended, wronged, or denied something we really want or need. Rage is the strongest form of anger.

Anger is a normal emotion. It involves a strong, uncomfortable and emotional response to a provocation. There is a sharp distinction between anger and aggression (verbal or physical, direct or indirect). Both influence each other. Anger can start aggression or increase its probability or intensity. However, it is not necessary nor sufficient for aggression.

Anger is a bit like a pressure cooker: we can only apply pressure against our anger for a certain amount of time until it explodes.

People show anger to others by their face, what they do with their body, not trying to understand or help other people's problems, and sometimes acts of aggression or force in public (e.g. punching a wall). Animals and humans might try to scare- by making loud sounds, trying to make their bodies look bigger, by showing their teeth, or by staring.

When we face a challenge, our response may be anger or fear. It may be difficult to decide whether to face the challenge, or walk away. In animal behaviour terms, we face the choice of a fight or flight response.

Being angry changes the human body by making the heart beat faster, increasing blood pressure (the pressure made by the blood at right angles of the walls of blood vessels) and increasing amounts of the hormones adrenaline and noradrenaline (chemicals which send messages to parts of the body to make changes).

Being angry makes the levels of the hormones adrenaline and noradrenaline in the body go up, although this does not last for very long. Adrenaline quickly makes the body ready to act when there is important trouble by increasing the supply of oxygen and glucose (needed to make energy) to the brain and muscles, while slowing less important things the body is doing, like digesting food.

Noradrenaline is released during stress. It goes to areas of the brain which control attention (how much you think or concentrate) and reactions. It is very important when the body chooses "fight-or-flight" (attacking or running away). Then it increases heart rate, takes glucose out of storage so it can be used, and increases blood flow to muscles.

All content from Kiddle encyclopedia articles (including the article images and facts) can be freely used under Attribution-ShareAlike license, unless stated otherwise. Cite this article:
Anger Facts for Kids. Kiddle Encyclopedia.