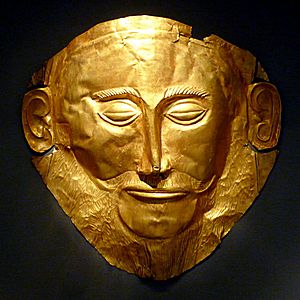 The Mask of Agamemnon which was discovered by Heinrich Schliemann in 1876 at Mycenae. It is now believed to pre-date the legendary Trojan War

Agamemnon (Greek: Ἀγαμέμνων) was a legendary king of Mycenae, as told in The Iliad. The son of Atreus and Aerope, he was the brother of Menelaus, and the commander of the unified Greek forces in the Trojan War. His wife was Clytemnestra, with whom he sired Iphigenia, Electra or Laodike, Orestes and Chrysothemis. Homer's Iliad tells the story of his quarrel with Achilles, the greatest of the Greek warriors, in the final year of the war. Upon his return home from Troy, Agamemnon is murdered by Aegisthus, the lover of Clytemnestra. The story of his return home and subsequent murder is featured in the Odyssey (5.266).

All content from Kiddle encyclopedia articles (including the article images and facts) can be freely used under Attribution-ShareAlike license, unless stated otherwise. Cite this article:
Agamemnon Facts for Kids. Kiddle Encyclopedia.