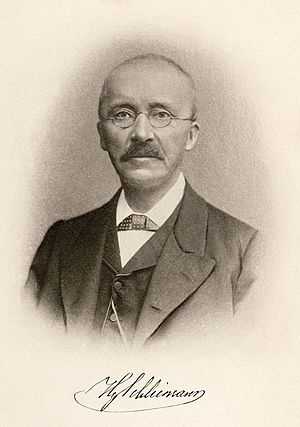 A portrait of Heinrich Schliemann 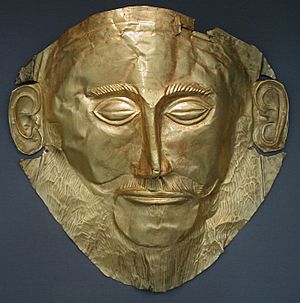 The 'Mask of Agamemnon', discovered by Heinrich Schliemann in 1876.

Heinrich Schliemann (January 6 1822 in Neubukowin, Germany - December 26 1890 in Naples) was a German archaeologist. He is famous for his work in Troy.

Heinrich Schliemann was born in Neubukowin, Germany. His father, Ernst Schliemann, was a minister. His mother, Luise Therese Sophie Schliemann, died in 1831 when Heinrich was 9 years old.

When his mother died, Heinrich lived with his uncle in Neustrelitz. He went to a grammar school in the town for about a year. His father paid the school fees.

Heinrich was very interested in history and was encouraged by his father to read history books. After he left school, he worked in a shop in Fürstenberg for about five years. He worked hard as an apprentice, but he continued to read in his spare time.

He was not able to work as an archaeologist at this time, so he moved to a company which imported and exported products. In this job, he visited many different countries around the world, and learnt to speak English, French, Dutch, Spanish, Portuguese, Swedish, Italian, Greek, Latin, Russian, Arabic, and Turkish. His ability to speak these languages was very important in his job, because he had to speak to other countries.

In 1850, Heinrich's brother, Ludwig Schliemann, died. He moved to Sacramento, where he opened a bank, just like his brother. The new bank bought gold dust and sold it on to make money. In six months, the bank bought and sold millions of dollars of the gold dust.

Heinrich married his wife, Ekaterina, in 1852, but the marriage was troubled. Ekaterina kept encouraging her husband to make more money, but Heinrich felt that they were rich enough.

Nobody knows how Heinrich became an archaeologist, but he continued to travel to see famous historical icons around the world. He even disguised himself as a tribesman to get into Mecca, the holy Muslim city.

He became very interested in Troy, which was involved in a big dispute at the time. He was inspired by many people in the city, especially Ferdinand Fouqué and Frank Calvert, who he met in 1868.

Many reports have been found which talk about Heinrich burying his 'treasure' he found in Troy, dubbed Priams gold

All content from Kiddle encyclopedia articles (including the article images and facts) can be freely used under Attribution-ShareAlike license, unless stated otherwise. Cite this article:
Heinrich Schliemann Facts for Kids. Kiddle Encyclopedia.