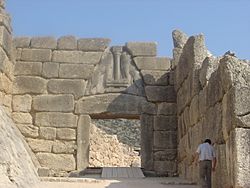 The Lion gate at Mycenae 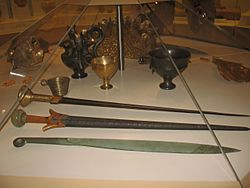 Mycenae (Greek Μυκῆναι Mykēnai or Μυκήνη Mykēnē), is an archaeological site in Greece. It is about 90 km south-west of Athens, in the north-eastern Peloponnese.

In the second millennium BC, Mycenae was one of the most important centers of early Greek civilization with a strong army. The time of Greek history from about 1600 BC to about 1100 BC is called Mycenaean Greece.

The Mycenaeans of Greece had learned many things from other lands. By 1400 B.C., they were known for their art, literature, and philosophy. Their most important city, Mycenae (mi see' née), was just north of what later became Corinth.

In 1300 BC the king built a wall 23 ft wide and 60 ft high. The stone blocks used were very big. A corbel arch, where each stone hung a little further beyond the one below, was used. A triangle was also used to support it. The Lion Gate, the main gate of the wall and an example of a corbel arch, is still admired today.

The common people went inside the palace walls in times of danger but at other times lived in their own houses. Their houses were shaped like deep rectangles with flat roofs and front porches. People worked at many different jobs. They were cooks, doctors, carpenters, tailors, woodcutters, and makers of textiles. The Mycenaeans grew many things and kept animals like oxen, sheep, pigs, and goats. They also built good roads and bridges. Their army was strong. Spears and javelins have been found, and also many swords, big and small. Their edge and point were used.

For their worship of gods, these people made shrines. Poseidon was worshiped as a chief deity, and the “protector of the sky” was Zeus. They also worshipped Apollo, Artemis, Hera and many others of the Greek religion.

All content from Kiddle encyclopedia articles (including the article images and facts) can be freely used under Attribution-ShareAlike license, unless stated otherwise. Cite this article:
Mycenae Facts for Kids. Kiddle Encyclopedia.