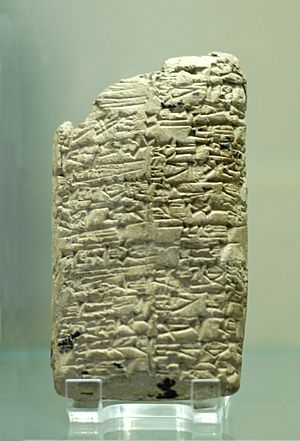 Close up of a clay tablet, found with the Manishtushu Obelisk. This is a copy of the inscription on the obelisk. It lists the victories of Rimush, king of Akkad, upon Abalgamash, king of Marhashi, and upon Elamite cities. 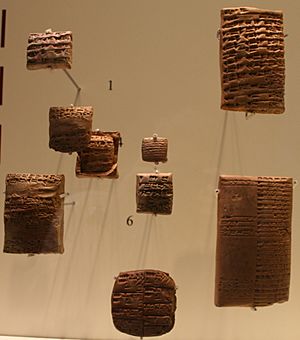 Clay tablets were a medium used for writing. They were common in the Fertile Crescent, from about the 5th millennium BC. A clay tablet is a more or less flat surface made of clay. Using a stylus, symbols were pressed into the soft clay. It is possible to correct errors on the tablet. The tablet was then baked until dry and hard, either by leaving it out in the sun, or in a fire. Sun-baked tablets could be moistened and recycled. The ones that survived thousands of years were baked in fire. They were used by the Sumerian civilisation in Mesopotamia.

Cuneiform was the first writing used on clay tablets. The system was used by several civilizations who spoke several different languages.

All content from Kiddle encyclopedia articles (including the article images and facts) can be freely used under Attribution-ShareAlike license, unless stated otherwise. Cite this article:
Clay tablet Facts for Kids. Kiddle Encyclopedia.