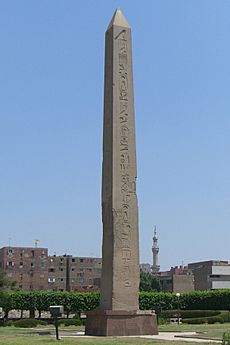 An obelisk is a stone made monument, much like a column but supporting nothing.

Obelisks were erected by Ancient Egyptians for an commemoration. Obelisks were usually made of a single piece of stone.

A bird's eye view of obelisk is square and this structure has gradually tapering four sides and its ends in a pyramidal top.

Originally, Obelisks originated with the holy stone of sanctuary which served the sun god, Ra, in Heliopolis. It usually made a pair in front of gate or sanctuary, and each side of obelisk was written hymn and results of king in hieroglyph.

Obelisks can have interior spaces.

There are similar form of obelisk in Europe and America, and some of them were taken from Egypt by Europeans and Americans.

A modern Obelisk has been raised in Washington (USA). An Egyptian one has been taken to Paris by Napoleon.

All content from Kiddle encyclopedia articles (including the article images and facts) can be freely used under Attribution-ShareAlike license, unless stated otherwise. Cite this article:
Obelisk Facts for Kids. Kiddle Encyclopedia.