The Karnak Temple Complex, commonly known as Karnak, from Arabic Khurnak meaning "fortified village", comprises a vast mix of decayed temples, chapels, pylons, and other buildings near Luxor, in Egypt. Construction at the complex began during the reign of Senusret I in the Middle Kingdom and continued into the Ptolemaic period, although most of the extant buildings date from the New Kingdom. The area around Karnak was the ancient Egyptian Ipet-isut ("The Most Selected of Places") and the main place of worship of the eighteenth dynasty Theban Triad with the god Amun as its head. It is part of the monumental city of Thebes. The Karnak complex gives its name to the nearby, and partly surrounded, modern village of El-Karnak, 2.5 kilometres (1.6 miles) north of Luxor. 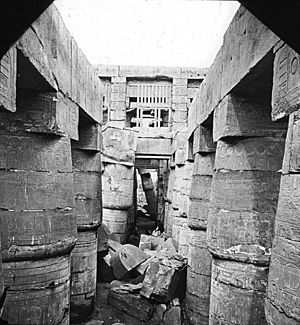 The Precinct of Mut is very ancient, being dedicated to an Earth and creation deity, but not yet restored. The original temple was destroyed and partially restored by Hatshepsut, although another pharaoh built around it in order to change the focus or orientation of the sacred area. Many portions of it may have been carried away for use in other buildings. 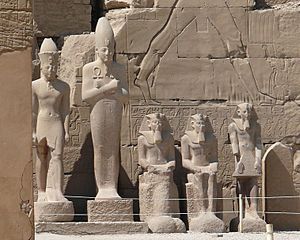 The key difference between Karnak and most of the other temples and sites in Egypt is the length of time over which it was developed and used. Construction of temples started in the Middle Kingdom and continued into Ptolemaic times. Approximately thirty pharaohs contributed to the buildings, enabling it to reach a size, complexity, and diversity not seen elsewhere. Few of the individual features of Karnak are unique, but the size and number of features are overwhelming. 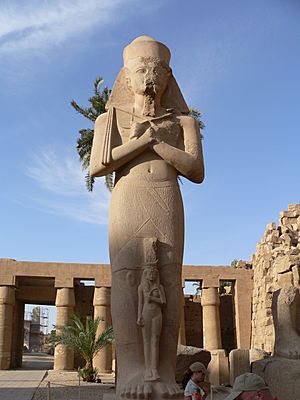 Pinedjem I statue at Karnak Temple

The architraves on top of these columns are estimated to weigh 70 tons. These architraves may have been lifted to these heights using levers. This would be an extremely time-consuming process and also would require great balance to get to such great heights. A common alternative theory regarding how they were moved is that large ramps were constructed of sand, mud, brick or stone and that the stones were then towed up the ramps. If stone had been used for the ramps, they would have been able to use much less material. The top of the ramps presumably would have employed either wooden tracks or cobblestones for towing the megaliths.

There is an unfinished pillar in an out-of-the-way location that indicates how it would have been finished. Final carving was executed after the drums were put in place so that it was not damaged while being placed. Several experiments moving megaliths with ancient technology were made at other locations – some of them are listed here.

In 2009 UCLA launched a website dedicated to virtual reality digital reconstructions of the Karnak complex and other resources.

The sun god's shrine has light focused upon it during the winter solstice. 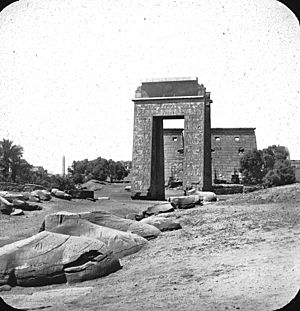 The history of the Karnak complex is largely the history of Thebes and its changing role in the culture. Religious centers varied by region, and when a new capital of the unified culture was established, the religious centers in that area gained prominence. The city of Thebes does not appear to have been of great significance before the Eleventh dynasty and previous temple building there would have been relatively small, with shrines being dedicated to the early deities of Thebes, the Earth goddess Mut and Montu. Early building was destroyed by invaders. The earliest known artifact found in the area of the temple is a small, eight-sided column from the Eleventh Dynasty, which mentions Amun-Re. Amun (sometimes called Amen) was long the local tutelary deity of Thebes. He was identified with the ram and the goose. The Egyptian meaning of Amun is, "hidden" or, the "hidden god". 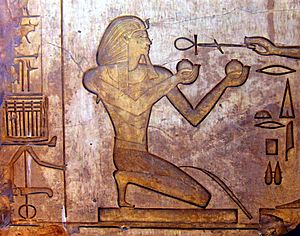 Major construction work in the Precinct of Amun-Re took place during the Eighteenth dynasty when Thebes became the capital of the unified Ancient Egypt. Almost every pharaoh of that dynasty added something to the temple site. Thutmose I erected an enclosure wall connecting the Fourth and Fifth pylons, which comprise the earliest part of the temple still standing. Hatshepsut had monuments constructed and also restored the original Precinct of Mut, the ancient great goddess of Egypt. She had twin obelisks, at the time the tallest in the world, erected at the entrance to the temple. One still stands, as the tallest surviving ancient obelisk on Earth; the other has broken in two and toppled.

The last major change to the Precinct of Amun-Re's layout was the addition of the first pylon and the massive enclosure walls that surround the whole precinct, both constructed by Nectanebo I of the Thirtieth dynasty.

In 323 AD, Roman emperor Constantine the Great recognised the Christian religion, and in 356 Constantius II ordered the closing of pagan temples throughout the Roman empire, into which Egypt had been annexed in 30 BC. Karnak was by this time mostly abandoned, and Christian churches were founded among the ruins, the most famous example of this is the reuse of the Festival Hall of Thutmose III's central hall, where painted decorations of saints and Coptic inscriptions can still be seen.

The precinct of Amun-Re is the only part of Karnak which is open to the public. There are also three smaller precicnts, which are not open:

All content from Kiddle encyclopedia articles (including the article images and facts) can be freely used under Attribution-ShareAlike license, unless stated otherwise. Cite this article:
Karnak Facts for Kids. Kiddle Encyclopedia.