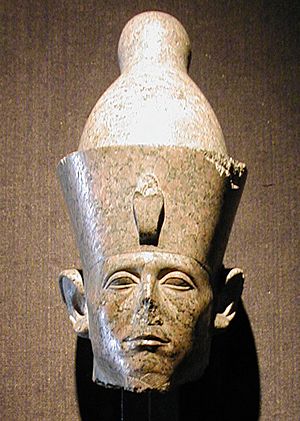 The Middle Kingdom is the period in the history of ancient Egypt stretching from the establishment of the Eleventh Dynasty to the end of the Fourteenth Dynasty, roughly between 2030 BC and 1640 BC.

The period had two phases, the 11th Dynasty, which ruled from Thebes and the 12th and the following dynasties which revolved around el-Lisht. These two dynasties were originally considered to be the full extent of this unified kingdom, but historians now consider the 13th Dynasty to at least partially belong to the Middle Kingdom.

All content from Kiddle encyclopedia articles (including the article images and facts) can be freely used under Attribution-ShareAlike license, unless stated otherwise. Cite this article:
Middle Kingdom of Egypt Facts for Kids. Kiddle Encyclopedia.