Pharaoh is the common title of the monarchs of ancient Egypt from the First Dynasty (c. 3150 BCE) until the annexation of Egypt by the Roman Empire in 30 BCE, although the actual term "Pharaoh" was not used contemporaneously for a ruler until Merneptah, c. 1200 BCE. In the early dynasty, ancient Egyptian kings used to have up to three titles, the Horus, the Sedge and Bee (nswt-bjtj) name, and the Two Ladies (nbtj) name. The Golden Horus and nomen and prenomen titles were later added.

In Egyptian society, religion was central to everyday life. One of the roles of the pharaoh was as an intermediary between the gods and the people. The pharaoh thus deputised for the gods; his role was both as civil and religious administrator. He owned all of the land in Egypt, enacted laws, collected taxes, and defended Egypt from invaders as the commander-in-chief of the army. Religiously, the pharaoh officiated over religious ceremonies and chose the sites of new temples. He was responsible for maintaining Maat (mꜣꜥt), or cosmic order, balance, and justice, and part of this included going to war when necessary to defend the country or attacking others when it was believed that this would contribute to Maat, such as to obtain resources.

During the early days prior to the unification of Upper and Lower Egypt, the Deshret or the "Red Crown", was a representation of the kingdom of Lower Egypt, while the Hedjet, the "White Crown", was worn by the kings of the kingdom of Upper Egypt. After the unification of both kingdoms into one united Egypt, the Pschent, the combination of both the red and white crowns was the official crown of kings. With time new headdresses were introduced during different dynasties like the Khat, Nemes, Atef, Hemhem crown, and Khepresh. At times, it was depicted that a combination of these headdresses or crowns would be worn together.

The word pharaoh ultimately derives from the Egyptian compound pr ꜥꜣ, * "great house", written with the two biliteral hieroglyphs pr "house" and ꜥꜣ "column", here meaning "great" or "high". It was used only in larger phrases such as smr pr-ꜥꜣ "Courtier of the High House", with specific reference to the buildings of the court or palace. From the Twelfth Dynasty onward, the word appears in a wish formula "Great House, May it Live, Prosper, and be in Health", but again only with reference to the royal palace and not the person.

Beaded scepter of Khasekhemwy (Museum of Fine Arts in Boston).

Sceptres and staves were a general sign of authority in ancient Egypt. One of the earliest royal scepters was discovered in the tomb of Khasekhemwy in Abydos. Kings were also known to carry a staff, and Pharaoh Anedjib is shown on stone vessels carrying a so-called mks-staff. The scepter with the longest history seems to be the heqa-sceptre, sometimes described as the shepherd's crook. The earliest examples of this piece of regalia dates to prehistoric Egypt. A scepter was found in a tomb at Abydos that dates to Naqada III.

Another scepter associated with the king is the was-sceptre. This is a long staff mounted with an animal head. The earliest known depictions of the was-scepter date to the First Dynasty. The was-scepter is shown in the hands of both kings and deities.

The flail later was closely related to the heqa-scepter (the crook and flail), but in early representations the king was also depicted solely with the flail, as shown in a late pre-dynastic knife handle which is now in the Metropolitan museum, and on the Narmer Macehead.

The earliest evidence known of the Uraeus—a rearing cobra—is from the reign of Den from the First Dynasty. The cobra supposedly protected the pharaoh by spitting fire at its enemies. 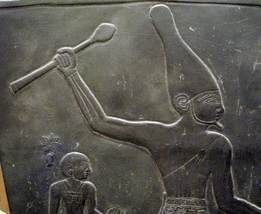 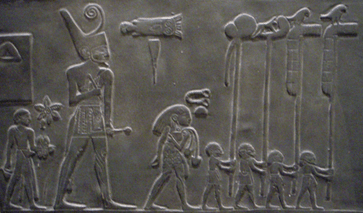 The red crown of Lower Egypt, the Deshret crown, dates back to pre-dynastic times and symbolised chief ruler. A red crown has been found on a pottery shard from Naqada, and later, Narmer is shown wearing the red crown on both the Narmer Macehead and the Narmer Palette.

The white crown of Upper Egypt, the Hedjet, was worn in the Predynastic Period by Scorpion II, and, later, by Narmer.

This is the combination of the Deshret and Hedjet crowns into a double crown, called the Pschent crown. It is first documented in the middle of the first dynasty. The earliest depiction may date to the reign of Djet, and is otherwise surely attested during the reign of Den.

The Nemes headdress dates from the time of Djoser. It is the most common type of crown that has been depicted throughout Pharaonic Egypt. Any other type of crown, apart from the Khat headdress, has been commonly depicted on top of the Nemes. The statue from his Serdab in Saqqara shows the king wearing the nemes headdress. 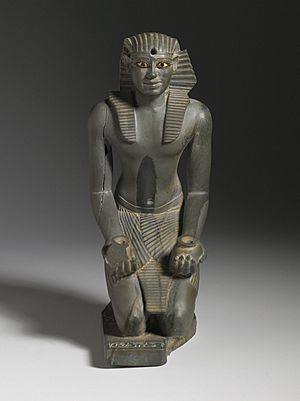 Osiris is shown to wear the Atef crown, which is an elaborate Hedjet with feathers and disks. Depictions of Pharaohs wearing the Atef crown originate from the Old Kingdom.

The Hemhem crown is usually depicted on top of Nemes, Pschent, or Deshret crowns. It is an ornate triple Atef with corkscrew sheep horns and usually two uraei. The usage (depiction) of this crown begins during the Early 18th dynasty of Egypt.

Also called the blue crown, the Khepresh crown has been depicted in art since the New Kingdom. It is often depicted being worn in battle, but it was also frequently worn during ceremonies. It used to be called a war crown by many, but modern historians refrain from defining it thus.

Egyptologist Bob Brier has noted that despite their widespread depiction in royal portraits, no ancient Egyptian crown has ever been discovered. Tutankhamun's tomb, discovered largely intact, did contain such regalia as his crook and flail, but no crown was found among the funerary equipment. Diadems have been discovered.

It is presumed that crowns would have been believed to have magical properties. Brier's speculation is that crowns were religious or state items, so a dead pharaoh likely could not retain a crown as a personal possession. The crowns may have been passed along to the successor.

During the early dynastic period kings had three titles. The Horus name is the oldest and dates to the late pre-dynastic period. The Nesu Bity name was added during the first dynasty. The Nebty name was first introduced toward the end of the first dynasty. The Golden falcon (bik-nbw) name is not well understood. The prenomen and nomen were introduced later and are traditionally enclosed in a cartouche. By the Middle Kingdom, the official titulary of the ruler consisted of five names; Horus, nebty, golden Horus, nomen, and prenomen for some rulers, only one or two of them may be known.

The Nesu Bity name, also known as Prenomen, was one of the new developments from the reign of Den. The name would follow the glyphs for the "Sedge and the Bee". The title is usually translated as king of Upper and Lower Egypt. The nsw bity name may have been the birth name of the king. It was often the name by which kings were recorded in the later annals and king lists.

The earliest example of a nebty name comes from the reign of king Aha from the first dynasty. The title links the king with the goddesses of Upper and Lower Egypt Nekhbet and Wadjet. The title is preceded by the vulture (Nekhbet) and the cobra (Wadjet) standing on a basket (the neb sign).

The Golden Horus or Golden Falcon name was preceded by a falcon on a gold or nbw sign. The title may have represented the divine status of the king. The Horus associated with gold may be referring to the idea that the bodies of the deities were made of gold and the pyramids and obelisks are representations of (golden) sun-rays. The gold sign may also be a reference to Nubt, the city of Set. This would suggest that the iconography represents Horus conquering Set. 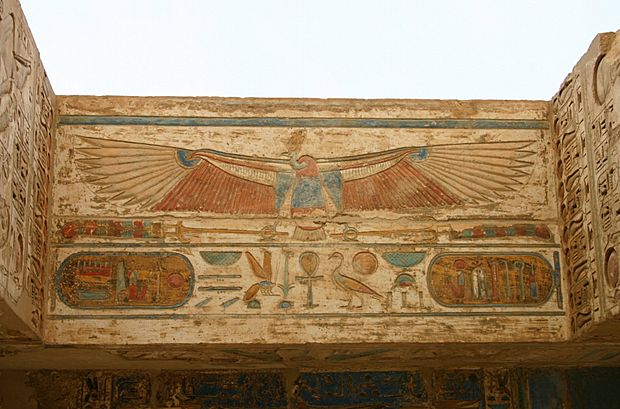 Nomen and prenomen of Ramesses III

All content from Kiddle encyclopedia articles (including the article images and facts) can be freely used under Attribution-ShareAlike license, unless stated otherwise. Cite this article:
Pharaoh Facts for Kids. Kiddle Encyclopedia.