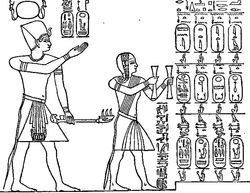 The start of the king list, showing Seti and his son - Ramesses II

The Abydos King List, also known as the Abydos Table, is a list of 76 kings of Ancient Egypt. It was written on a wall of the Temple of Seti I at Abydos, Egypt. The list has three rows of 38 cartouches (borders around the name of a king) in each row. The upper two rows list the kings, while the third row repeats Seti I's throne name and praenomen.

It lists the Old Kingdom kings in the order in which they ruled. It is the only record of the names of many of the kings of the Seventh and Eighth Dynasties.

This names of some earlier pharaohs who were not seen to be lawful rulers — such as Akhenaten, Hatshepsut, Smenkhkare, Tutankhamen, and Ay, have been left out of the list.

Drawing of the cartouches in the Abydos King List.

All content from Kiddle encyclopedia articles (including the article images and facts) can be freely used under Attribution-ShareAlike license, unless stated otherwise. Cite this article:
Abydos King List Facts for Kids. Kiddle Encyclopedia.