See Amenemhat, for other individuals with this name.

Amenemhat III, also spelled Amenemhet III, was a pharaoh of the Twelfth Dynasty of Egypt. He ruled from c. 1860 BC to c. 1814 BC, the highest known date being found in a papyrus dated to Regnal Year 46, I Akhet 22 of his rule. His reign is regarded as the golden age of the Middle Kingdom. He may have had a long coregency (of 20 years) with his father, Senusret III. 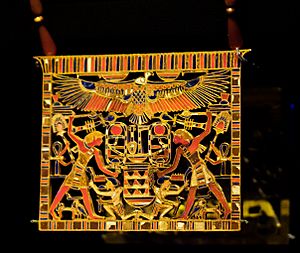 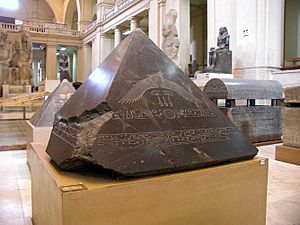 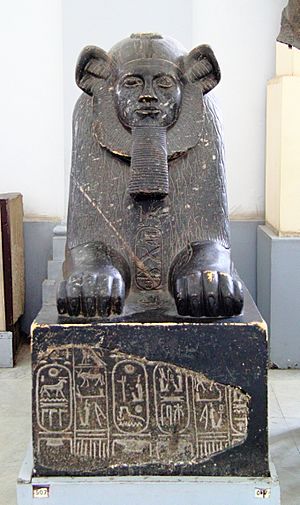 Amenemhat III as a sphinx, a so-called "Hyksos sphinx"

Toward the end of his reign he instituted a coregency with his successor Amenemhet IV, as recorded in a now damaged rock inscription at Konosso in Nubia, which equates Year 1 of Amenemhet IV to either Year 46, 47, or 48 of his reign. His daughter, Sobekneferu, later succeeded Amenemhat IV, as the last ruler of the twelfth dynasty. Amenemhat III's throne name, Nimaatre, means "Belonging to the Justice of Re."

He built his first pyramid at Dahshur (the so-called "Black Pyramid"), but there were construction problems and it was abandoned. Around Year 15 of his reign the king decided to build a new pyramid at Hawara, near the Faiyum. The pyramid at Dahshur was used as burial ground for several royal women.

The mortuary temple attached to the Hawara pyramid may have been known to Herodotus and Diodorus Siculus as the "Labyrinth". Strabo praised it as a wonder of the world. The king's pyramid at Hawara contained some of the most complex security features of any found in Egypt. Nevertheless, the king's burial was robbed in antiquity. His daughter or sister, Neferuptah, was buried in a separate pyramid (discovered in 1956) 2 km southwest of the king's. The pyramidion of Amenemhet III's pyramid tomb was found toppled from the peak of its structure and preserved relatively intact; it is today in the Cairo Egyptian Museum.

There is very little evidence for military expeditions in the reign of the king. There is one record for a small mission in year nine of the king. The evidence for that was found in a rock inscription in Nubia, near the fortress of Kumma. The short text reports that a military mission was guided by the mouth of Nekhen Zamonth who reports that he went north with a small troop and that nobody died when going back south.

Many expeditions to mining areas are recorded under the king. There are two expeditions known to the Wadi el-Hudi at the southern border of Egypt, where Amethyst was collected. One of the enterprises dates to year 11, of the king. Two further to year 20 and to year 28. There were further mining expeditions to the Wadi Hammamat. These are dated to year 2, 3, 19, 20 and 33 of the king's reign. The inscriptions of year 19 and 20 might be related to the building start of the pyramid complex at Hawara. They report the breaking of stone for statues.

At the Red Sea coast, at Mersa was discovered a stela mentioning an expedition to Punt under Amenemhat III. The highest official involved in the expedition was the high steward Senebef. Other people in charge were a certain Amenhotep and the chamberlain Nebesu.

During his long rule Amenemhat continued the work probably started by his father to link the Fayum Depression with the Nile. The area had been a mere swamp previously. A canal 16 kilometres (9.9 mi) long and 1.5 kilometres (0.93 mi) wide was dug, known as Mer-Wer (the Great Canal); it is now known as Bahr Yussef. The banks for the central deep side were at a slope of 1:10, to allow use of non-cohesive soil and rock fill. A dam called Ha-Uar ran east–west, and the canal was inclined towards the Fayum depression at the slope of 0.01 degrees. The resultant Lake Moeris could store 13 billion cubic meters of flood water each year. This immense work of civil engineering was eventually finished by his son Amenemhat IV and brought prosperity to Fayum. The area became a breadbasket for the country and continued to be used until 230 BC when the Lahun branch of the Nile silted up.

The vizier Kheti held this office around year 29 of king Amenemhat III's reign. The Rhind Mathematical Papyrus is thought to have been originally composed during Amenemhat's time. The monuments of Amenemhat III are fairly numerous and of excellent quality. They include a small but well decorated temple at Medinet Madi in the Faiyum, which he and his father dedicated to the harvest goddess Renenutet.

Amenemhat III is, together with Senusret III, the best-attested Middle Kingdom king by number of statues. About 80 statues or fragments of statues can be assigned to him. The sculpture of Amenemhat III continued the tradition of Senusret III. Many of his works no longer represent a young idealized king, but instead an expressive physiognomy, showing signs of age. There is an amazingly wide range of stones used for the sculpture of the king, not attested for any king before. Furthermore, the king introduced several new types of sculptures, many of these types inspired by older prototypes, dating back to the early Dynastic Period. There are two facial types that can be assigned to Amenemhat III.

All content from Kiddle encyclopedia articles (including the article images and facts) can be freely used under Attribution-ShareAlike license, unless stated otherwise. Cite this article:
Amenemhat III Facts for Kids. Kiddle Encyclopedia.