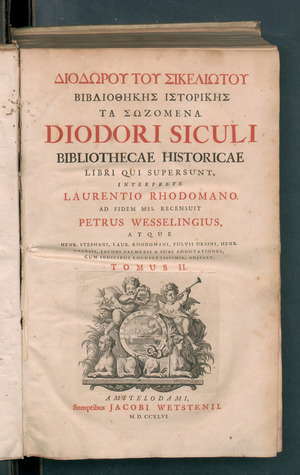 Diodorus Siculus or Diodorus of Sicily was a Greek historian. He is known for writing the universal history Bibliotheca historica, much of which survives, between 60 and 30 BC. It is arranged in three parts. The first part covers mythic history up to the destruction of Troy. It is arranged geographically, describing regions around the world including Egypt, India, Arabia, Greece and Europe. The second part covers the Trojan War to the death of Alexander the Great. The third part covers the period to about 60 BC. The title Bibliotheca, meaning 'library', shows that he was using the work of many other authors.

Diodorus wrote that he was born at Agyrium in Sicily (now called Agira). There is only two other references to Diodorus. One is by Jerome, in his Chronicon from 49 BC, who wrote that "Diodorus of Sicily, a writer of Greek history, became illustrious". There is also a Greek inscription in the collection of the Agyrium (Inscriptiones Graecae XIV, 588) about the tombstone of one "Diodorus, the son of Apollonius". (This may be a different person).

Diodorus' book, which he called Bibliotheca historica meaning "Historical Library", consisted of 40 books. Books 1–5 and 11–20 survive. Small sections of the lost books are preserved in Photius and the excerpts of Constantine Porphyrogenitus.

It was divided into three sections. The first six books treated the mythic history of the non-Hellenic and Hellenic tribes to the destruction of Troy and are geographical in theme, and describe the history and culture of Ancient Egypt (book I), of Mesopotamia, India, Scythia, and Arabia (II), of North Africa (III), and of Greece and Europe (IV–VI).

In the next section (books VII–XVII), he tells the history of the world from the Trojan War down to the death of Alexander the Great. The last section (books XVII to the end) concerns the historical events from the successors of Alexander down to either 60 BC or the beginning of Julius Caesar's Gallic Wars. As the last books have been lost, it is not known if Diodorus reached the beginning of the Gallic War as he promised at the beginning of his work or, as evidence suggests, old and tired from his labours he stopped at 60 BC.) He used the name "Bibliotheca" to show that he was writing a work from many sources. Identified authors on whose works he drew include Hecataeus of Abdera, Ctesias of Cnidus, Ephorus, Theopompus, Hieronymus of Cardia, Duris of Samos, Diyllus, Philistus, Timaeus, Polybius, and Posidonius.

His writing of gold mining in Nubia in eastern Egypt is one of the earliest texts on the topic, and describes in vivid detail the use of slave labour in terrible working conditions.

He also described the Celts: "Physically the Celts are terrifying in appearance with deep-sounding and very harsh voices. In conversation they use few words and speak in riddles, for the most part hinting at things and leaving a great deal to be understood. They frequently exaggerate with the aim of extolling themselves and diminishing the status of others. They are boasters and threateners, and given to bombastic self-dramatization, and yet they are quick of mind and with good natural ability for learning." (Book 5)

All content from Kiddle encyclopedia articles (including the article images and facts) can be freely used under Attribution-ShareAlike license, unless stated otherwise. Cite this article:
Diodorus Siculus Facts for Kids. Kiddle Encyclopedia.