Jerome (c. 27 March 347 – 30 September 420) was a priest, confessor, theologian, and historian. He was born at Stridon, a village near Emona on the border of Dalmatia and Pannonia. He is best known for his translation of most of the Bible into Latin (the translation that became known as the Vulgate), and his commentaries on the Gospels. His list of writings is extensive. 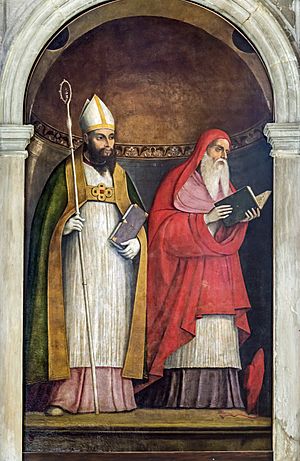 The protégé of Pope Damasus I, who died in December of 384, Jerome was known for his teachings on Christian moral life, especially to those living in large popular centers such as Rome. He is recognised as a Saint and Doctor of the Church by the Catholic Church, the Eastern Orthodox Church, the Lutheran Church, and the Anglican Communion. His feast day is 30 September.

Eusebius Sophronius Hieronymus was born at Stridon. He was of Illyrian ancestry and his native tongue was the Illyrian dialect. He was not baptized until about 360–366 A.D., when he went to Rome with his friend Bonosus. He studied under the grammarian Aelius Donatus. There Jerome learned Latin and at least some Greek.

Jerome is the second most sizeable writer (after Augustine of Hippo) in ancient Latin Christianity. In the Catholic Church, he is recognized as the patron saint of translators, librarians and encyclopedists. He acquired a knowledge of Hebrew by studying with a Jew who converted to Christianity. The later resurgence of Hebrew studies within Christianity owes much to him.

All content from Kiddle encyclopedia articles (including the article images and facts) can be freely used under Attribution-ShareAlike license, unless stated otherwise. Cite this article:
Jerome Facts for Kids. Kiddle Encyclopedia.