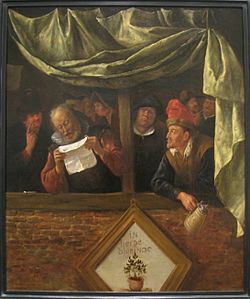 Rhetoric is the art of persuading people by speaking and (later) by writing. People can be trained in this skill. It is the art or the technique of persuasion, used by orators (public speakers). Its origin was in Ancient Greece of the 5th century BC. They made their decisions by speaking for or against proposals in a public place. Also, speeches were made when a person was accused of a serious crime before the magistrates.

In the modern world, speeches made on television or in front of crowds are rhetoric. Before World War II, radio was a powerful tool of propaganda. Propaganda is rhetoric. Another angle is the use of newspapers and books to persuade readers towards a particular point of view. Thus the principles of rhetoric do not depend on a live audience. However, in the ancient world, it did mean speaking to people directly with the intention of persuading them.

The Romans, who were much influenced by the ancient Greeks, also used the same methods for decision-making. Cicero was one of their famous orators. In their case, the debates did not involve all citizens, just the Roman Senate or the courts.

Because rhetoric was so important to them, the Greeks and Romans wrote about how to be a good rhetorician. This is sometimes called 'secondary rhetoric'. It is a technique which can be taught, and used in writing. An early example is Plato, who wrote his works in the form of dialogues. Each question raised is discussed between two characters. One character is called Socrates (who was Plato's tutor when he was young), and the other was some other philosopher. This idea is well-known now, and has been copied many times.

In mediaeval universities rhetoric was taught as part of the curriculum. Rhetoric, dialectic and grammar form the trivium which, with the quadrivium, make up the seven liberal arts of Western culture. During Antiquity and the Middle Ages, rhetoric was used for persuasion in public and political arenas, and also in the courts of justice. Several hundred rhetorical figures were recognised by classical rhetoricians. Some of these are still in use, such as metaphor, simile and paradox.

The words 'rhetoric' or 'sophism' are often used with a negative meaning, of disinformation or propaganda. They are also used to describe a speech with doubtful or slanted arguments. Some very witty things have been said against orators and their rhetoric:

"The orator is one who intends to mislead another, without being misled himself". Plato
"Oratory is the art of playing for one's own purpose upon the weaknesses of men, and merits no respect whatever". Kant

As the art of persuasion, the rhetoric continues to be important in present-day public life. This includes the following:

According to Aristotle, rhetoric has three methods of persuasion:

All content from Kiddle encyclopedia articles (including the article images and facts) can be freely used under Attribution-ShareAlike license, unless stated otherwise. Cite this article:
Rhetoric Facts for Kids. Kiddle Encyclopedia.