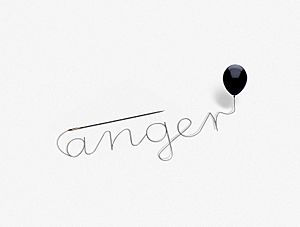 A metaphorical visualization of the word anger.

Metaphor is a term for a figure of speech. It does not use a word in its basic literal sense. Instead, it uses a word in a kind of comparison. We run, and we also say rivers run. We may run into trouble, especially if we run up a bill at the bar.

So a metaphor uses words to make a picture in our mind. It takes a word from its original context, and uses it in another.

Metaphors are an essential part of language: it is not possible to speak or write without them. A simple example is the word "run". This has a basic meaning of "moving quickly" or "go with quick steps on alternate feet, never having both feet on the ground at the same time". The Concise Oxford Dictionary then gives 34 other uses as a verb; 21 uses as a noun; about 50 uses in short phrases. All of these are metaphors, although we do not usually notice this.

We use metaphors to make indirect comparisons, but without using 'like' or 'as' – because that would be a simile. A simile is a direct comparison: "Jane is like a child".

A metaphor very often uses the verb 'to be': "love is war", for example, not "love is like war" (that is a simile). Poetry includes much metaphor, usually more than prose.

Spam is an example that any email user knows about – this word was originally a metaphor, from 'Spam', a type of canned meat. Servers putting unwanted email into somebody's inbox was similar to waiters putting unwanted Spam into food. This was originally suggested by a Monty Python scene. When we use a metaphor very often and we forget the old meaning, or forget that the two meanings are connected, this is a 'dead metaphor'.

Originally metaphor was a Greek word for 'transfer'. It came from meta ('beyond') and pherein ('carry'). So the word metaphor in English was a metaphor, too. Today in Greek, metaphor is a trolley (a thing that is pushed for carrying shopping or bags).

In the simple metaphor, the effort to understand what the author or speaker intends is relatively low, and hence it may easily be used with a wider and less sophisticated audience.

A complex metaphor happens where a simple metaphor is based on a secondary metaphoric element. For example using a metaphor of 'light' for 'understanding' may be complexified by saying 'throwing light' rather than 'shining light'. 'Throwing' is an extra metaphor for how light arrives.

A compound metaphor is one where there are multiple parts in the metaphor that are used to snag the listener. These parts may be enhancement words such as adverbs, adjectives, etc.

Each part in the compound metaphor may be used to signify an additional item of meaning.

Two people walk off a tennis court. Someone asks the loser: "What happened?".

All content from Kiddle encyclopedia articles (including the article images and facts) can be freely used under Attribution-ShareAlike license, unless stated otherwise. Cite this article:
Metaphor Facts for Kids. Kiddle Encyclopedia.