Figure of speech facts for kids 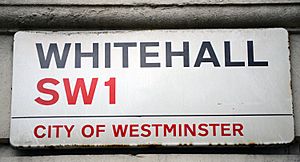 Whitehall is a road in the City of Westminster, London used synecdochically to refer to the entire UK civil service, as many government departments are nearby.

A figure of speech is a way of saying a message. Many figures of speech are not meant to be understood exactly as they are said: they are not literal, factual statements.

Metaphors are very common examples. A common figure of speech is to say that someone "threw down the gauntlet". This does not mean that a person threw a protective wrist-covering down on the ground. Instead, it usually means that the person issued a public challenge to another person (or many persons).

All content from Kiddle encyclopedia articles (including the article images and facts) can be freely used under Attribution-ShareAlike license, unless stated otherwise. Cite this article:
Figure of speech Facts for Kids. Kiddle Encyclopedia.