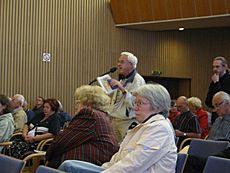 Citizen making an argument at a town meeting.
This article is about "argument" as it relates to logic and philosophy. It is not about disagreement or pieces of information passed in computer code.

An argument is an attempt to persuade someone of something. Reasons are given to accept the conclusion. The general structure of an argument in a natural language is that premises (propositions or statements) support the claim or conclusion.

An argument is a reason to support an opinion.

There can be a "strong argument" or a "convincing argument" (for example, a good reason for why something should be done). Argumentation is the process of conducting an argument.

The opposite is a "weak argument" or an "unconvincing argument". An argument can be valid or invalid or a combination of both. Some arguments may appear reasonable, but they turn out to be misleading or wrong.

All content from Kiddle encyclopedia articles (including the article images and facts) can be freely used under Attribution-ShareAlike license, unless stated otherwise. Cite this article:
Argument Facts for Kids. Kiddle Encyclopedia.