Domenico Ghirlandaio (1449 – 11 January 1494) was an Italian painter. He painted during the Renaissance (about 1400-1600) in Florence. He was an important painter in the time of the Renaissance. In about 1480, he became the official portrait artist for wealthy people in Florence.

Michelangelo Buonarroti was his most famous apprentice. He started learning in Domenico’s workshop at age 13. 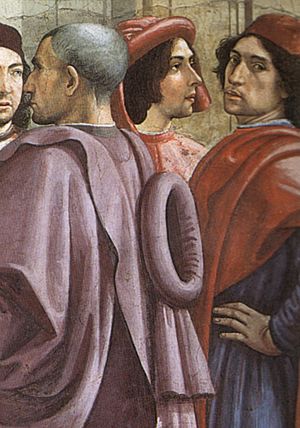 "Selfportrait", from the left, David Ghirlandaio, Bastiano or Sebastiano Mainardi and Domenico Ghirlandaio

Ghirlandaio died in 1494 of an contagious fever and was buried in Santa Maria Novella. The day and month of his birth and death are not known, but he died in early January of his forty-fifth year. He had been married two times and had six children. One of his three sons, Ridolfo Ghirlandaio, also became a noted painter in Florence.

All content from Kiddle encyclopedia articles (including the article images and facts) can be freely used under Attribution-ShareAlike license, unless stated otherwise. Cite this article:
Domenico Ghirlandaio Facts for Kids. Kiddle Encyclopedia.